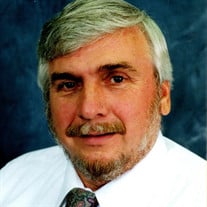 William Daniel Wilson, Bill to his colleagues and peers, “Tippy” or “Joe” to his West Virginia relatives; entered into rest on Sunday, November 7, 2021 at his home. He could often be found tinkering in his garage singing along with his 8-track radio. He enjoyed fixing friends’ and neighbors’ electronics and appliances. He loved spending time with his kids and grandkids, taking them sightseeing all over the country in one of his many Dodge family vans. He always looked forward to the annual Grotts family float trip, which he helped start 35+ years ago. He never knew a stranger, they were only friends he hadn’t met yet. Spending the last ten winters in Texas; he enjoyed playing cards, singing karaoke, and going to dances with special friends and neighbors while staying warm. He also spent many hours reading and studying history and genealogy. Bill graduated from Kingwood, WV High School in 1961. He enlisted in the U.S. Air Force and served for 10 years from 1961-1971. He was in heavy ground radar during those years, trained in Biloxi, MS. He was then stationed in Texas, Iran, Ramstein Germany, Montana, and Alaska. Upon leaving the Air Force he enrolled in West Virginia University where he received a bachelor’s degree in business and marketing. While in college he worked in the white-water rafting industry and taught courses in electronics and electricity in the public schools in Preston County, WV. A job brought Bill to Illinois where he adopted the state as his own. He went on to Belleville Area College (now SWIC) to earn a degree in ACHR. He subsequently was the instructor of the ACHR program at Menard Correctional Center through the BAC program. He continued to work there until an opening for the coordinator/instructor of the program opened up bringing him back to the main campus at the college where he remained until retiring in 1999. During that time, he earned a master’s degree in occupational education from SIU in Carbondale. Upon retiring, he became interested in the War of 1812 and genealogy. He was instrumental in building a replica of Hill’s Fort in Greenville, IL. He spent many years building and restoring the fort, alongside some very dedicated history friends. Hill’s Fort is a remarkable replica for the public to visit and enjoy. By way of his interest in genealogy, he traced his wife’s heritage back to the first 18 families that settled in the territory which became Illinois after the Revolutionary War, which prompted him to write one of his six books “The Grotts/Seybold Family Heritage: Early Illinois Pioneers”. Bill was a lifetime member and past president of the Hill’s Fort Society, a member of the General George Rogers Clark Chapter of the SAR, member and past president of the Illinois Society of 1812. He was also a member of the VFW, DAV, and the American Legion Post 1026 of Albers, IL. He received the lifetime achievement award from the Illinois State Historical Society for his work promoting the history of 1812 through innumerable public lectures and educational programs. He was an author and co-author with Kevin Kaegy, and editor of six books of the 1812 era, most notable was “The Forts and Blockhouses of Early Illinois”. Bill was born January 24, 1944 in Albright, WV, the son of Alston Daniel and Doris June, nee Gallatin, Wilson. He married Rose Marie Grotts June 6, 1986 in Belleville and she survives in Albers. In addition to his wife he is survived by his children, Garth (Tracey) Wilson of Whitesburg, GA., James Pullen of Carlyle, IL, Susan Warburton of Havre, MT., Patricia (Dave) Epps of Granite City, IL, Kimberly (fiancé, Aaron Fauke) Lowe of Breese, IL., and Brandon Lowe of Albers, IL.; seven grandchildren, Robin (Clint) Loepker, Chealsey (Nate) Riley, Brittany Witt, Connor Wilson, Cayden Wilson, Morgan (Jake) Reinhardt, and Abbie Horstmann; 10 great-grandchildren, Chloe & Carson Loepker, Jayleigh, Jordyn, Adrianna, and Kaden Riley, Jayson Stremcha, Raelynn & Remy McCall, and Lucas Miller; a brother, Gary (Sid) Wilson of Kingwood, WV; a sister, Carolyn “Sue” Parks of Terra Alta, WV; and sisters-in-law and brothers-in-law, Sandi Whitford, Linda Kirbach, Mike & Wilma Grotts, Clifton Grotts, Earl & Karen Grotts, Edie & Chris Nichols and Richard Grotts. In addition to his parents he was preceded in death by a daughter, Diane Pullen; a granddaughter, Courtney Taylor; a sister, Doris Fulmer; a brother, Daniel Richard Wilson; his grandparents, James Harvey Wilson & Clara Ellen Minor Wilson; William Fleming Gallatin & Fannie Nicholson Gallatin Shrout; his father-in-law and mother-in-law, Clifton Leroy & Alice Marie Grotts; and sisters-in-law and brothers-in-law, Mary Griffin, Brenda Grotts, Bill Parks, Charles Griffin, John Whitford, Gene Grotts, Ralph Kirbach, and Mike Marroquin. Funeral Services will be held at 11:30 a.m. Saturday, November 13, 2021 at Nordike Funeral Home in New Baden. Burial with full military honors will follow at Greenmount Cemetery in New Baden. Visitation will be held Friday, November 12, 2021 from 4 p.m. until 7 p.m. and again on Saturday, November 13, 2021 from 10:30 a.m. until time of services at Nordike Funeral Home in New Baden. Memorials may be made to Hill’s Fort Society or the Albers American Legion Post 1026 and will be received at the funeral home.

The family of William Daniel Wilson created this Life Tributes page to make it easy to share your memories.

William Daniel Wilson, Bill to his colleagues and peers, “Tippy”...

Send flowers to the Wilson family.