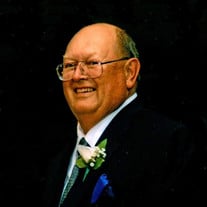 William “Bill” H. Thoele Jr., age 77, of New Baden passed away on Thursday, June 17, 2021 at Highland Healthcare Center. He was born in Highland on February 4, 1944, the son of William G. and Annie (Frerker) Thoele. He married Margaret Kollmann at St. George Catholic Church in New Baden on August 23, 1967, and she survives in New Baden. In addition to his wife, Mr. Thoele is survived by his daughters: Sharon (Michael) Deutsch of New Memphis, Cynthia (Kevin) Ogden of New Baden, and Cheryl (Carrie) Viviano of Aurora, Colorado; his grandson, Nicholas Thoele of Bloomington, IL; step-grandchildren: Kevin (Brittany) Ogden of Glen Carbon, IL, Amanda (Charlie) Tincher of Trenton; step-great-grandchildren: Jayden, Lily, and Cameron; his sister: Lucille (Gary) Koontz of New Baden; nieces and nephews: Jeffery Koontz of New Baden, Jody (special friend, Melissa Haley) Koontz of Albers, and Lynn (Wallace) McDuffey of Carlyle. He was preceded in death by his mother and father and his brother, Robert Thoele and niece Kim Koontz. Bill worked for Kohnen Concrete Products in Germantown from 1968 until 1972 and then started working for Wilbert Vault Company for the next nine years. After that he moved on to Lanter Couriers and worked as a dispatcher until his retirement. He enjoyed tinkering with lawnmowers, cutting grass, and working in his garden. He loved spending time with his family and especially his grandson Nicholas. Funeral Mass of Christian Burial will be held at 10:00 AM on Tuesday, June 22, 2021 at St. George Catholic Church in New Baden with Fr. Gene Neff officiating. Interment will follow at Resurrection Cemetery in New Baden. Visitation will be held from 8:00 until 9:45 AM on Tuesday, June 22, 2021 at St. George Catholic Church in New Baden. Memorials made in memory of Bill are suggested to the St. George Cemetery Fund or the charity of donor’s choice and will be received at church or at Nordike Funeral Home, 15 East Hanover Street, New Baden, IL 62265.

The family of William "Bill" Thoele created this Life Tributes page to make it easy to share your memories.

Send flowers to the Thoele family.