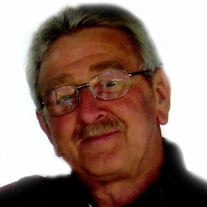 William J. Swinney, 71, of New Baden, died Thursday, July 1, 2021 at Barnes-Jewish Hospital in St. Louis, MO. He was born September 22, 1949 in Breese, the son of Mason and Edna, nee Kann, Swinney. He married Sharon Pfeiffer May 31, 2003 in Las Vegas, NV and she survives in New Baden. In addition to his wife he is survived by his children, Mark Swinney of Highland, Monica Vasquez of Freeburg, and Stephanie (Scott Odom) Kavanaugh and Robin (Tim Raw) Pfeiffer all of Okawville; five grandchildren, Bryanne (Anthony) Bechtoldt, Brooke (Sean) Wright, Lily and Isabella Reaka, and Molly Vasquez; two great-grandchildren, Nolan Bechtoldt and Layla Wright; and his siblings, Lola (Jim) Degroff of Troy, Mason (Roberta) Swinney of Louisville, KY., and Edward Swinney of Freeburg. In addition to his parents he was preceded in death by a grandson, Richard Kavanaugh. Before his retirement, Mr. Swinney worked on the bridge crew from 1975 to 2003 for the State of Illinois and was a veteran of the United States Army having served in the Vietnam War. He was a member of St. George Parish and the American Legion Post 321 for 27 years. Bill was a graduate of Wesclin High School Class of 1968 and was very involved with organizing the class reunions. He loved talking with people and never met a stranger. Funeral Services will be held at 10:30 a.m. Tuesday, July 6, 2021 at Nordike Funeral Home in New Baden with Deacon John Fridley officiating. Burial will follow at Resurrection Cemetery in New Baden. Visitation will be held Tuesday, July 6, 2021 from 9 a.m. until time of services at Nordike Funeral Home in New Baden. Memorials may be made to the American Kidney Foundation, American Heart Association, or the American Diabetes Association and will be received at the funeral home.

The family of William J. Swinney created this Life Tributes page to make it easy to share your memories.

Send flowers to the Swinney family.