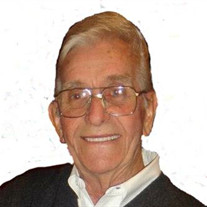 It is with great sadness that we announce the passing of William “Bill” E. Parker, who passed away at his home in Belleville surrounded by his family on Friday, January 5, 2018, at the age of 78. Bill was born in Breese on August 14, 1939, the son of Daniel and Bessie (Zinschlag) Parker. He will lovingly be remembered by his wife of 56 years, Kathy (Ziehnert) Parker, whom he married on September 23, 1961, in Belleville. In addition to his wife, he will forever be remembered by his three daughters: Kristy (Bruce) Frazer of Belleville, Kelly (Brian) Sinskey of O’Fallon, and Kerry (Chavis) Escobedo of Venice, Florida; always our loving Papa to his six grandchildren: CPT Lance Frazer, Lindsey (Thomas) Vander Pol, Kourtney and Casey Sinskey, Aiden and Alexis Escobedo; one great grandchild, Beckett Vander Pol; and cousins Dr. Daniel (Audrey) Walsh of St. Pete Beach, Florida and Sydney (Rob) Pennington of Des Peres, Missouri. He was preceded in death by his parents. Bill loved growing up in Carlyle and had many wonderful memories. He graduated from McKendree University in 1961 with a degree in Business Administration and received his graduate degree from Southern Illinois University Carbondale. After marrying Kathy, he moved to Belleville for his career in banking at First National Bank/Magna Bank as Vice President of Business Development and Branch Manager and then worked at Continental Airlines for part of his “retirement.” Bill was a Veteran of the United States Army Reserve. During his time in the reserve, he trained soldiers who were being deployed to Vietnam. Bill was the past Exalted Ruler and member of the Elks Lodge #481 for over 50 years. He served as past Treasurer for the Whiteside School District 115 from 1968-1980. Bill previously served as Chairman for the Belleville American Cancer Society, past Board of Director for the St. Clair American Cancer Society, past member of the Downtown Promotional Division of the Chamber of Commerce for the city of Belleville, Belleville Chamber of Commerce and served on the Family Service Council for Scott A.F.B. Bill was also a member of The Association of Military Banks, The Bank Steering Committee and past Chairman of the Consumer Credit Committee. He was a recipient of the Masonic Award for Outstanding Community Service. Bill was an avid sports fan, with the St. Louis Cardinals, Dallas Cowboys, and the University of Illinois basketball as his favorite teams. He was an excellent sportsman, playing baseball, basketball, track, and football all throughout school and college. He even had the amazing opportunity to try out for the St. Louis Cardinals. Bill was a true outdoorsman, enjoying fishing, hunting, and gardening, but most of all he loved spending time with his family. He was a loving husband, devoted father, caring grandfather, and friend to all. To my husband, my love, my best friend, Between now and then, until I am with you again, I’ll be loving you always. Funeral services were held on Monday, January 8, 2018, at Nordike Funeral Home in Carlyle. Memorials may be made to the Belleville Area Humane Society. Online condolences may be made to the Parker family by visiting www.nordikefuneralhome.com

It is with great sadness that we announce the passing of William &#8220;Bill&#8221; E. Parker, who passed away at his home in Belleville surrounded by his family on Friday, January 5, 2018, at the age of 78. Bill was born in Breese on August... View Obituary & Service Information

The family of William Parker created this Life Tributes page to make it easy to share your memories.

It is with great sadness that we announce the passing of William...

Send flowers to the Parker family.