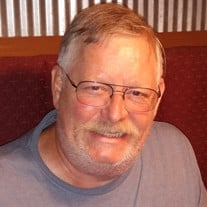 Tom Terry, age 62, entered into rest on September 13, 2019 at St. Elizabeth hospital in O'Fallon. He was born on January 6, 1957 in Breese, Illinois the son of Tom and Hazel (Raterman) Terry. He married his bride, Deb Simmons, on June 24, 1976 in Effingham, Illinois. They resided in Altamont, Illinois for a year before moving to Carlyle. He celebrated 43 years of marriage with his "buttercup” this year. In addition to his wife, he is survived by his children, Jamie and Rodney Cutter (Greenwood, SC), Josh Terry (Ramsey, IL) and Joe and Elizabeth Terry (Carlyle). Tom was also blessed to be "Grandpa" to Lauren, Lance, Riley and Kenzie. He is also survived by his mother, Hazel "Ginny" Terry of Centralia, his father-in-law and mother-in-law Haldon and Jane Simmons of Altamont, IL and three sisters Julie of Heartville, IL, Dianne of Belleville and Sheila of Centralia. Tom was a hard worker all of his life. He began at World Color where he spent 25 years. Then he was employed at Carlisle SynTec for the last 19 years before retiring on August 2, 2019. In his leisure time he enjoyed camping, fishing, gardening and spending time at his club house. Funeral services will be held at 11:00 AM on Thursday, September 19, 2019 at Nordike Funeral Home in Carlyle. Burial will follow at Carlyle Township Cemetery. Visitation will be on Wednesday, September 18, 2019 from 5:00 until 8:00 PM and on Thursday from 8:00 AM until the time of services at Nordike Funeral Home in Carlyle.

The family of Tom C. Terry created this Life Tributes page to make it easy to share your memories.

Send flowers to the Terry family.