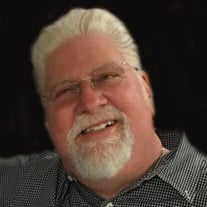 Thomas Dale Wilkerson, 57, of New Baden, died Sunday, November 13, 2016 at his home. He was born April 2, 1959 in St. Louis, MO, the son of Leonard and Thelma, nee Hutt, Wilkerson. He married Karen Marie Langenhorst on March 18, 1995 in New Baden and she survives in New Baden. In addition to his wife he is survived by his children, Austin & Delaney Wilkerson of New Baden; his brother, Leonard A. (fiancée, Kandy Kidd) Wilkerson, DO, MBA, MPH, FAAFP, and his children, Lea Bryan, Steven Wilkerson, and Stephanie Wilkerson all of Greensboro, NC; his father-in-law and mother-in-law, Tom & Julie Langenhorst of New Baden; brother-in-law and sister-in-law, Mark & Lisa Langenhorst, and their children, Malina Langenhorst, Theron Dall, and Connor Dall all of Damiansville. He was preceded in death by his father, Leonard Wilkerson; and his mother and step-father, Thelma and Louis Kadas, MD. Mr. Wilkerson was a stock broker. He was a member of the First United Methodist Church in Trenton where he played the bass guitar in the Praise Band. A Memorial Service will be held at 10 a.m. Friday, November 18, 2016 at the First United Methodist Church in Trenton with Pastor Mike Rucker officiating. Friends may call Thursday, November 17, 2016 from 4:30 p.m. until 6:30 p.m. and again on Friday, November 18, 2016 from 8 a.m. until time of services at the First United Methodist Church in Trenton. Memorials may be made to the Trenton First United Methodist Church and will be received at the church or Nordike Funeral Home, 15 E. Hanover, New Baden, IL 62265 who is serving the family.

The family of Thomas Dale Wilkerson created this Life Tributes page to make it easy to share your memories.

Send flowers to the Wilkerson family.