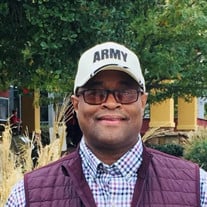 Thomas (Tony) L. Sparks, Jr., 61, of Fairview Heights, IL, died Sunday, October 25, 2020, at Barnes Jewish Hospital in St. Louis, MO. He was born February 01, 1959, in Chattanooga, TN, the first born of Thomas and Rachel (Wood). He married Charlene (Rojek) on December 07, 1993, in Murphysboro, IL, she resides in Fairview Heights. In addition to his wife, he is survived by sons Tony Sparks of Pennsylvania, and Patrick (Mindy) Commean of Belleville, IL; grandchildren Skylar and Chase Commean; father-in-law Roman Rojek, brothers and sisters Wilbert (Julie), Rodney, Maurice (Ginger), June Sparks, Lillie (Lovest) Morris and Reba Sparks. Brothers and sisters-in-law William (Michelle), Monica (Rich) Nowakowski, Mark (Angela), Greg (Beth). Loving and dedicated nephew, uncle, and friend to many he considered his family. In addition to his parents, Tony was preceded in death by his mother-in-law Shirley (Weaver) Rojek, sister Kimberly Sparks, and brothers-in-law Kenny Prusacki, Johnny and Roman Rojek. Tony was Assistant Public Security Director at America Center in St. Louis, MO, for 21 years after retiring as an SFC in the United States Army, serving 21 years, 3 months and 20 days. He was a one of a kind personality who never met a stranger, he had an infectious smile, joke to share or story to tell, a superb athlete, sports fanatic, and chef. Tony adored his family and would do anything to help anyone. He was the most loving husband, Dad, and Papa; who loved life and made the most of every day. Services are pending. Memorials in Tony’s honor may be made to Charlene Sparks, c/o Nordike Funeral Home, 15 E. Hanover Street, New Baden, IL 62265.

The family of Thomas (Tony) L. Sparks Jr. created this Life Tributes page to make it easy to share your memories.

Send flowers to the Sparks family.