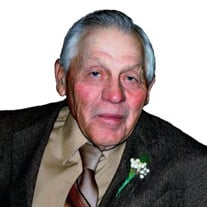 Sylvester Leo Hilmes, 92, of Breese passed away on Friday, March 5, 2021 at his home surrounded by loved ones. He was born in Breese on February 12, 1929 the son of Ferd and Dolores (Pax) Hilmes. He married the love of his life, Juliana Usselman at St. Augustine Catholic Church in Breese on June 30, 1953 and she survives in Breese. In addition to his wife, he is survived by five daughters: Trisha (Jim) Kohrmann, Sharon (Morris) Fullerton, Rita (Jim) Fuhler, Donna (Ralph) Beckmann, Sandy (Joe) Jansen; his son, Alan (Jackie) Hilmes; daughter-in-law, Sandy Hilmes; thirty-two grandchildren and fifty-seven great grandchildren with four more expected soon; his brothers: Robert Hilmes, Joe (Doris) Hilmes, Gerald (Marilyn) Hilmes; his sisters, Florence Usselman; and Alice Pendegrass; his in-laws: Geraldine Hilmes, Joan Hilmes, Irene Ziegler, Nick Timmermann, and Don Boehm. He was preceded in death by his mother, father, and sons: Kenneth Hilmes and Matt Hilmes; father-in-law and mother-in-law William and Wilhilmina Usselman; brothers: Ferd Hilmes, Wilferd (Charlotte) Hilmes, and Jerome Hilmes; in-laws: Maureen Hilmes, Ray Usselman, Florence Usselman, Ray Usselman, Veronica Boehm, Virgil and Dorothy Buller, Margaret Timmermann, Joe and Evelyn Drees, Maryann Usselman, Andrew Usselman, and Tom Ziegler. Sylvester was a veteran of the Unites States Army and served as a Sergeant during the Korean War. He was a member of St. Dominic Catholic Church, Clinton County Farm Bureau, and the Breese American Legion. He was a lifelong farmer and extremely proud of his straight as an arrow crop rows. In his later years he enjoyed gardening and watching his family continue the farming tradition, he didn’t miss a chance to go out and watch the harvest or ride along in the combine. He treasured the times he was able to watch his sons, grandsons, and great-grandsons pull tractors. He took great pleasure watching all of his beloved grow. There was nothing that he cherished more than his wife of 67 years, Juliana. Mr. Hilmes lived by the saying: “Three things I will never Change: my religion, my wife, and the color of my tractor.” Funeral Mass of Christian Burial will be held at 11:00 AM on Wednesday, March 10, 2021 at St. Dominic Catholic Church in Breese with Rev. Patrick Peter officiating. Interment with full military honors will follow at St. Dominic / St. Augustine Catholic Cemetery in Breese. Visitation will be held from 9:30 until 10:45 AM on Wednesday, March 10, 2021 at St. Dominic Catholic Church in Breese. Seating will be limited during the funeral mass, all in attendance will be required to wear a face covering and practice social distancing guidelines. Memorials made in memory of Sylvester are suggested to St. Dominic Catholic Church and will be received at church or at Nordike Funeral Home, 150 North Clinton Street, Breese, IL 62230.

Sylvester Leo Hilmes, 92, of Breese passed away on Friday, March 5, 2021 at his home surrounded by loved ones. He was born in Breese on February 12, 1929 the son of Ferd and Dolores (Pax) Hilmes. He married the love of his life, Juliana Usselman... View Obituary & Service Information

The family of Sylvester Leo Hilmes created this Life Tributes page to make it easy to share your memories.

Sylvester Leo Hilmes, 92, of Breese passed away on Friday, March...