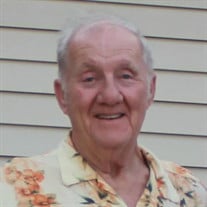 Stanley Stephen Garner passed away Friday, July 26, 2019 at St. Joseph's Hospital in Breese, Illinois. Steve also known as Stanley to friends, was born August 14,1947 in Dallas Texas, the son of Jerrel C. Garner and Carrie Turner Garner/Brink who have both preceded him in death. His father, Jerrel was killed in an accident at his workplace when Steve was 3 years old and his mother remarried years later to Richard Brink, of whom has also preceded him in death. Our brother Steve, loved many and was loved by many, has been reunited with many loved ones who have gone on before him, of which are: Grandparents, Tracy and Rose Garner from Grand Prairie, Texas, Victor and Sadie Turner from Beckmeyer, Ill.; step grandmother, Emma Brink; 2 brothers, Jerrel (Pam) Garner, Carlyle, Ill., Michael R. Garner, Carlyle, Ill. There were many aunts and uncles who have been waiting for Steve to show up at heaven's door including...George (Monk) and Sylvia Mae Jannett, Cebert and Mary Jane Turner, all from Beckemeyer , Bill and Hazel Nave, Ivan Turner, all from O'Fallon, Ill., Dean Sprehe, North Carolina, Clyde and Wanda Williams Jr., Waco, Texas, Jimmy and Nell Garner, Grand Prairie, Texas, Jesse and Bernice Norris, Fort Worth, Texas, Elmer and Neda Cox, Don Hendrix, Tracy and Virgie Garner Jr., all from Grand Prairie, Texas, Gilbert Brink from Alhambra, Ill., Harold & Marie Hanke from Hoffman, Ill. and a nephew, Ryan Berry, Carlyle, Ill. Steve is survived by: sisters Carolyn Garner Wuebbles, Linda Garner; Brothers, John and Carolee Brink and Mark and Randy Barnhart and Aunts Dorothy Turner in Fairview Heights, Ill., Vivian Sprehe in North Carolina; Faye Hendrix in Grand Prairie Texas, along with his nieces and nephews; Keith and Lori Sheets, Scott and Jennifer Wuebbles, Kevin and Carrie McCarron, Clay Mitchell and Amber Metcalf, Chris and Margo Kampwerth and Chris Garner, Josh and Cara Garner, a niece, Coy and Tracy Jean Garner Williamson, Oklahoma; Rebecca Talles in Chicago; Pastor Sadie Brink of Port Arthur, TX, Will Brink of Denver Colorado and and many, many cousins. He had some pretty special friends over the years, including a very close bond with his cousin Randy Jannett from Virginia; and special friends; Mike Gross, Aaron Daniels, Jeff Wurm, Michael Risley, Freddy Gehrs and Rick Sheets, who were there to support him in the golden years, although there were many, many friends through the years that are remembered by family. When he turned 18, he joined the Marines and off to the war he went. When he left us, he was a loving, funny and hardworking young man, but when he came back to us, he came back a different young man. He had been hurt pretty bad and hospitalized then sent home, but told us he had signed up for another stent in Nam. He came home again and life was never the same with Stanley. He had been through much and seen too much, and couldn't forget what he had seen. He then met Jesus! He became an avid student of the Holy Bible and spoke to all who came to visit him about his Savior. He belonged to the Methodist Church in Beckemeyer and later to the Trinity Bible Baptist Church in Carlyle. Stanley never married nor had children, but he had many nieces and nephews who dearly loved him and wanted to spend time with him. He was at almost all our family functions and while there, the life of the party! Steve loved The Marines, dogs, cats, fishing, food, family, friends and fun. He would give you the shirt off his back, or maybe to tell you to go get one out of the dirty clothes basket! This was Stanley. Everyone who knew Stanley wanted to keep knowing him. The family is asking everyone who wants to join us remembering this Great American Patriot, brother, uncle, and friend of ours to come to McKendree Chapel Cemetery near Keyesport for a graveside service at 11 am on Friday, August 9, 2019 followed by a Celebration of life at the VFW in Carlyle.

The family of Stanley Stephen Garner created this Life Tributes page to make it easy to share your memories.

Send flowers to the Garner family.