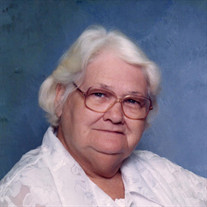 Shirley Sorensen, 86, of New Baden, died Tuesday, November 30, 2021 at her home. She was born January 11, 1935 in Collinsville, the daughter of William and Gertrude, nee Walker, Jones. She married Niels J. Sorensen, Sr. November 20, 1954 in Tunica, MS and he preceded her in death on January 17, 2010. Shirley is survived by her children, Niels (Karla) Sorensen, Jr. of Albers, Richard (Barb Wempe) Sorensen of Breese, Barry Czarnecki of CO, Mary Ann (Mark) Lake of Bluford, Cerese Smothers of IN, RoxAnn Bickner of Belleville, and Laurie (Brad Hinckle) Castellano of Trenton; a daughter-in-law, Kathleen Sorensen of New Baden; and grandchildren, great-grandchildren, and great-great-grandchildren. In addition to her husband, Shirley was preceded in death by her father, William Jones; her mother, Gertrude Kittel; a son, David Sorensen; a grandson, Christopher Campbell; a son-in-law, Emil Bickner; and siblings and in-laws. Mrs. Sorensen was a homemaker. She enjoyed reading, collecting dolls and cookie jars, and she was always hunting for bargains at thrift stores and yard sales. Shirley’s greatest passion was children; in addition to raising her own eight children, she loved fostering many many more, and then when the grandchildren came along, she loved helping with them. Friends and family may visit Wednesday, December 15, 2021 from 12 p.m. until 5 p.m. at the family home at 108 White Oaks Drive in New Baden. Memorials may be made to the American Diabetes Association or the Alzheimer’s Association and will be received at the home or Nordike Funeral Home, 15 E. Hanover St., New Baden, IL 62265 who is serving the family.

The family of Shirley Sorensen created this Life Tributes page to make it easy to share your memories.

Send flowers to the Sorensen family.