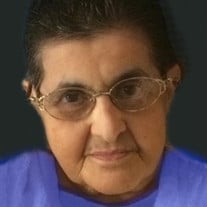 Shirley J. Gill, 78, of New Baden, died Wednesday, January 18, 2017 at Memorial East Hospital in Shiloh, IL. She was born September 19, 1938 in Sioux City, IA, daughter of John E. and Frances (Skaff) Hanna. She married Henry L. Gill on July 27, 1958 in Sioux City, IA and he preceded her in death on September 6, 2011. She is survived by two daughters, Carol J. (Allen) Horcher of Belleville, and Barbara A. Gill of Fairview Heights; a granddaughter, Amanda M. Gill of New Baden; two sisters, Marie Cownie and Kathy (Mel) Wieseler all of Sioux City, IA; two brothers, Ron (Marge) Hanna of La Quinta, CA., and Don (Gina) Hanna of Sioux City, IA.; and sisters-in-law and brothers-in-law, Esther Wright and Delphene & Danny Turner all of Conway, AR, and Joanne & Jimmy Bomer of Flippin, AR. In addition to her parents and husband she was preceded in death by a daughter, Jodi L. Gill who died June 26, 2011; a brother, John E. Hanna; and brothers-in-law and sister-in-law, Charles Wright, and Phoebe & Bill Barber. Mrs. Gill was a homemaker. Memorial services will be held at 6 p.m. on Monday, January 23, 2017 at Nordike Funeral Home in New Baden with Pastor Skip Leininger officiating. Friends may call from 4:30 p.m. until 6 p.m. Monday, January 23, 2017 at Nordike Funeral Home in New Baden. Memorials may be made to the family and will be received at the funeral home.

The family of Shirley J. Gill created this Life Tributes page to make it easy to share your memories.

Send flowers to the Gill family.