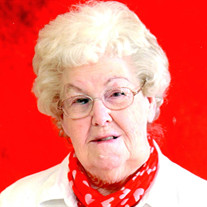 Ruth M. Winter, 97, of Breese, died Wednesday, March 6, 2019 at Aviston Countryside Manor. She was born June 15, 1921 in Rural Clinton County, IL, daughter of Wilber and Cecilia (Herkler) Sellers. She married August F. Winter on September 16, 1939 in St. Louis, MO and he preceded her in death on April 24, 1998. She is survived by a son, John (Debbie) Winter of Breese; a daughter, Jennifer (David) Focht-Benoist of St. Louis, MO; six grandchildren; eight great-grandchildren; one great-great-grandchild; and a sister, Wilma Berndsen of Aviston. In addition to her parents and husband, she was preceded in death by a daughter, Judith Koch; a son-in-law, Ronald Koch; and two sisters, Henrietta Furdek and Dorothy Ilges. Mrs. Winter was an office manager at Clinton County Farm Bureau in Breese. She was a member of St. Dominic Parish and altar sodality and the St. Joseph Hospital Auxiliary in Breese. Ruth was an avid quilter, reader, and bingo player. Funeral Mass of Christian Burial will be held at 10:30 a.m. on Monday, March 11, 2019 at St. Dominic Catholic Church in Breese with Rev. Pat Peter officiating. Burial will follow at St Dominic/St. Augustine Cemetery in Breese. Friends may call from 9:30 a.m. until time of service Monday, March 11, 2019 at St. Dominic Catholic Church in Breese. In lieu of flowers, memorials may be made to St. Dominic Parish, Aviston Countryside Manor Activity Fund, or St. Joseph Hospital Auxiliary and will be received at the church or Nordike Funeral Home, 150 N. Clinton, Breese, IL 62230 who is serving the family.

The family of Ruth M. Winter created this Life Tributes page to make it easy to share your memories.

Send flowers to the Winter family.