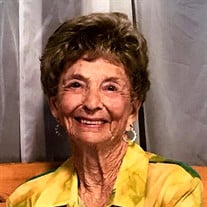 Ruth Bruns, 90, of Aviston, passed away on Saturday, July 13, 2019 at The Villas at St. James in Breese. She was born May 4, 1929 in Keyesport, daughter of Henry W. and Pauline V. (West) Stone. She married Andrew B. “Andy” Bruns on August 19, 1950 in Carlyle and he preceded her in death on February 9, 1992. She is survived by her three daughters, Kathy (Andy) Kamm of Highland, Chris (Gary) Lewis of Aviston, and Elaine (Glenn) Robke of Breese; a son-in-law, Rod (Lesley) Timmermann of Germantown; 12 grandchildren: Jessica (Luke) Bower, Aaron (special friend Daniel Beckham) Kamm, Jordan (Chrystal) Kamm, Gary A. Lewis, Katrina (Shane) Wieter, Travis (Maria) Lewis, Cassandra (Jason) Deering, Eric (Bri) Robke, Craig (Haeli) Robke, Alex, Andrew, and Ryan Timmermann: 19 great-grandchildren; and many nieces and nephews. In addition to her parents and husband she was preceded in death by a daughter, Evonne Timmermann; and a brother Carl Stone and Dale E. Stone, in infancy; and stepmother Zelma Isaak. Mrs. Bruns was a homemaker. She was a member of St. Francis Parish, the American Legion Post 1239 Auxiliary, the Red Hat Ladies Society, and the Royal Neighbors Camp 10256 as well as a volunteer for BCMW for over 10 years. Funeral Mass of Christian Burial will be held at 11:00 a.m. on Tuesday, July 16, 2019 at St. Francis Catholic Church in Aviston with Rev. Dan Friedman officiating. Burial will follow at St. Francis Cemetery in Aviston. Friends may call on Tuesday from 9:00 a.m. until 11:00 a.m. at St. Francis Catholic Church in Aviston. Memorials may be made to the Shriners Hospital for Children, Residential Hospice or the family’s wishes and will be received at church or at Nordike Funeral Home.

The family of Ruth Bruns created this Life Tributes page to make it easy to share your memories.

Send flowers to the Bruns family.