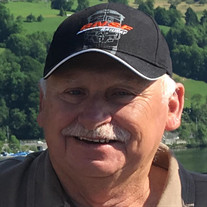 Roy R. Paulsmeyer, age 68, of Hoffman passed away on Saturday, December 4, 2021 at his home surrounded by his loving family. He was born on February 1, 1953 in Centralia, the son of Richard and Shirley (Fechtler) Paulsmeyer. He married Brenda Beckmann at St. Mary’s Church in Carlyle on July 30, 1977 and she survives in Hoffman. In addition to his wife of 44 years, he is survived by his children: Ryan Paulsmeyer, Brooke Paulsmeyer, and Brianne Paulsmeyer; a brother, Steven (Cindy) Paulsmeyer; special aunts: Barb Arter and Dottie Lawrence; his in-laws: Trish Beckmann, Carol Beckmann, Steve (Julie) Beckmann, Ralph (Donna) Beckmann, Karl (Doug Black) Beckmann, and Kimberly Beckmann-Beer; as well as numerous nieces and nephews. He was preceded in death by his mother, father, and daughter Andrea; mother and father-in-law, Leo and Leona Beckmann, brother-in-law Roger Beckmann, and nephew, Brian Beckmann. Roy was a life-long Hoffman area resident, and spent his entire adult life living on the original Paulsmeyer homestead. He was life member of Trinity Lutheran Church in Hoffman. He worked as a tool and die maker for Rockwell Int’l. for 30 years, and then started a new career with BNSF Railroad, where he worked for 15 years before retiring. He was very mechanically skilled and could fix anything. He always had a project going, and loved to help family and friends with theirs. He enjoyed fishing, farming, and restoration of the homestead. He loved taking the entire family on numerous trips over the years. Roy said his biggest accomplishment was his children, and they were the pride of his life. Funeral services will be held at 1:00 PM on Wednesday, December 8, 2021 at Trinity Lutheran Church in Hoffman. Interment will follow at Trinity Lutheran Cemetery in Hoffman. Visitation will be held from 5:00 until 8:00 PM on Tuesday, December 7, 2021 at Nordike Funeral Home in Carlyle and on Wednesday from 12:00 PM until the time of services at Trinity Lutheran Church in Hoffman. Memorials made in memory of Roy are suggested to Trinity Lutheran School, The Jared Burke Foundation, Clinton County Humane Society, Centralia Humane Society, or Chakota Therapeutic Riding Center, and will be received at church or at Nordike Funeral Home, 740 Fairfax Street, Carlyle, IL 62231.

Roy R. Paulsmeyer, age 68, of Hoffman passed away on Saturday, December 4, 2021 at his home surrounded by his loving family. He was born on February 1, 1953 in Centralia, the son of Richard and Shirley (Fechtler) Paulsmeyer. He married Brenda... View Obituary & Service Information

The family of Roy R. Paulsmeyer created this Life Tributes page to make it easy to share your memories.

Roy R. Paulsmeyer, age 68, of Hoffman passed away on Saturday,...

Send flowers to the Paulsmeyer family.