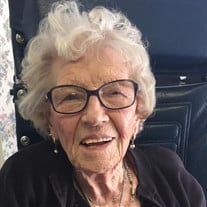 Rose Margaret Theising, age 101, of Carlyle passed away at the Carlyle Healthcare Center on Friday, September 30, 2016. Rose was born in Little York, Wade Township on July 25, 1915, the daughter of Henry and Catherine (Budde) Voss. She married Raymond J. Theising on April 14, 1937 at St. Mary’s Catholic Church in Carlyle and he preceded her in death on November 26, 1977. In addition to her husband, Rose was preceded in death by her parents, four sisters: Anna Kampwerth, Henrietta Peters, Mary Kuhl, and Elizabeth Voss; three brothers: Joseph Voss, Ed Voss, and Alloys Voss; as well as her grandson Cameron Danesh. Mrs. Theising is survived by her daughters: Arlene (Kenneth) Lilie-Green of St. Louis and Judith Greer of Carbondale; four grandchildren: Sohalia (Michael) Danesh, Lori (Guy) Sisulak, Brian (Amy) Eigenrauch, and Jason (Hilary) Eigenrauch; eight great grandchildren: Ashlee (Nate) Church, Callie (Johnathon) James, Brockton Miller, Cameron Litz, Brody, Regan, Madison and Ryder Eigenrauch; two great – great grandchildren: Kinley and Gunnar James. Rose was a current member of St. Cecilia Church in Bartelso and a former member of St Francis Xavier Church in Carbondale. Mrs. Theising moved to Carbondale after her husband’s death and was a long time resident of the area before returning to Carlyle. She was known as a very artistic woman, she would collect and refinish antique furniture, design and sew a lot of her own clothing as well as her children’s. Rose’s cooking skills were wonderful, particularly when she cooked any wild game. She enjoyed working in her garden and had many beautiful flowers. Mrs. Theising was a strong willed and hardworking women. She was the last of her seven siblings, most of which lived to be in their late 90’s and all the way up to 108 years of age. A Funeral Mass of Christian Burial will be held at 2:00 PM on Monday, October 3, 2016 at St. Cecilia Catholic Church in Bartelso with Fr. James Buerster officiating. Interment will follow at St. Cecilia Cemetery in Bartelso. Visitation will be held on Sunday, October 2, 2016 from 3 until 6:00 PM at Nordike Funeral Home in Carlyle and on Monday from 1 until 2:00 PM and St. Cecilia Church in Bartelso. Memorials left in memory of Rose are suggested to Heartland Hospice or the Poor Handmaids of Jesus Christ and will be received at Nordike Funeral Home, 740 Faifax Street, Carlyle, Illinois.

Rose Margaret Theising, age 101, of Carlyle passed away at the Carlyle Healthcare Center on Friday, September 30, 2016. Rose was born in Little York, Wade Township on July 25, 1915, the daughter of Henry and Catherine (Budde) Voss. She married... View Obituary & Service Information

The family of Rose M. Theising created this Life Tributes page to make it easy to share your memories.

Rose Margaret Theising, age 101, of Carlyle passed away at the...

Send flowers to the Theising family.