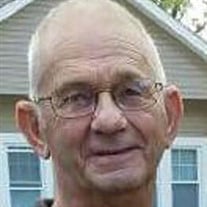 Ronald Eugene Finn, born June 10, 1940 in Wilcox, PA, passed away on May 22, 2019 at his residence in Staunton, IL surrounded by his family and his loving wife Pamela (Mollet) who took wonderful care of him during his battle with cancer. Ron is preceded in death by his parents, two brothers and four sisters. He is also preceded in death by stepson, Ernest Sousa. Ron is survived by his wife of 30 years Pamela. His children Donna Rowe, Darla Schalck (David), Donald Finn (Beth), Diane Mallette (Jim) and beloved stepdaughter GloryAnn Ridall (Don), 14 grandchildren, 8 great grandchildren, 4 sisters and many friends and family. Enlisting in the United States Air Force at age of 17 proudly served his country for 21 years, deployed to Vietnam from 71-72. Ron received the Bronze Star, Meritorious Service Medal, and the Air Force Commendation Medal for his work and service, retiring in 1978 as a MSGT. Not one to sit idle, Ron began painting houses which he enjoyed and considered a relaxing change from his stress filled military role. He continued to paint until 2007. With a love for camping and the outdoors, Ron and Pam became snowbirds traveling south each winter to avoid the cold. Rockport, TX became their winter home, making many friends across the country. Ron had a passion for cards, and was a skilled player of Euchre, Cribbage and Texas Holdem. He enjoyed Crappie fishing along with kayak fishing in the Gulf of Texas. No one was a stranger; Ron always managed to befriend people everywhere he went. He will be sorely missed for his wit, sarcasm and generosity. The family would like to thank the Residential Hospice team for their care and compassion. A celebration of life service will be held at 4:00 pm on Sunday, June 9,2019 at the New Douglas Community Center. The family will greet friends from 2:00 until 6:00 pm. In lieu of flowers, the family wishes donations to be made on Ron’s behalf to one of the following, Veterans Administration, American Cancer Society, or Residential Hospice and will be received at Nordike Funeral Home in Carlyle. Online condolences may be made to Ron’s family by visiting www.nordikefuneralhome.com.

Ronald Eugene Finn, born June 10, 1940 in Wilcox, PA, passed away on May 22, 2019 at his residence in Staunton, IL surrounded by his family and his loving wife Pamela (Mollet) who took wonderful care of him during his battle with cancer. Ron... View Obituary & Service Information

The family of Ronald Eugene Finn created this Life Tributes page to make it easy to share your memories.

Send flowers to the Finn family.