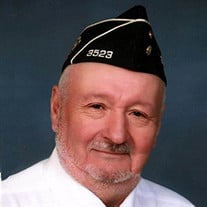 Robert “Bob” H. Kleine, 74, of Carlyle passed away on Tuesday, October 16, 2018 at St. Elizabeth’s Hospital in O’Fallon. He was born in Centralia on June 2, 1944, the son of Ralph and Maxine (Barger) Kleine. He married Karen Johnson on May 15, 1987 in Clinton County and she survives in Carlyle. In addition to his wife, he is survived by his children: Connie (Jay) Hart of Greenville, Frances (Dan) Ledbetter of Farmington, Arkansas, Tammy (Randy) Tratchel of Carlyle, Thomas (Jeni) McCord of Hoffman, Sammy (Tasha) McCord of Carlyle, and Caroline (TJ) Worley of Sandoval; his grandchildren: Casey and Brandy Hart, Courtney and Jeffery Bodine, Tanner and Hanna Leith, Machelle, Kody, Mathew, Jordan, Joseph, and Jacob McCord, Breanna, Kylee and McKenzie Melton; great grand-daughter, Emma Anthony; his brother, Michael (Dena) Kleine and sister-in-law, Karen Kleine all of Carlyle. Robert was preceded in death by his mother, father and brother, James Kleine. Mr. Kleine was a veteran of the United States Army. He was a lifetime member of the American Legion Post 404 and past president of the Men’s Auxiliary VFW Post 3523. He was a truck driver all of his adult life and retired from Beckmann Trucking in Beckemeyer. Bob loved to garden and old tractors. More than anything, he loved spending time with his family. Funeral services will be held at 10:00 AM on Friday, October 19, 2018 at Nordike Funeral Home in Carlyle. Interment will follow at Carlyle Township Cemetery. Visitation will be held on Thursday, October 18, 2018 from 4:00 until 8:00 PM and on Friday from 9:00 AM until the time of services at Nordike Funeral Home in Carlyle. Memorials made in memory of Bob are suggested to the Clinton County Relay for Life or the American Heart Association and will be received at Nordike Funeral Home in Carlyle. Online Condolences may be made to the Kleine family by visiting www.nordikefuneralhome.com

The family of Robert "Bob" Kleine created this Life Tributes page to make it easy to share your memories.

Send flowers to the Kleine family.