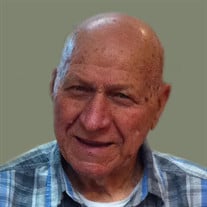 Robert H. “Butch” Deiters, 89, of Breese, died Friday, June 16, 2017 at Aviston Countryside Manor. He was born June 3, 1928 in Breese, son of Bernard and Anna E. (Hilmes) Deiters. He married Anna M. Liening April 18, 1950 in Breese and she preceded him in death February 25, 2007. He is survived by his children, Roberta (Dave) Beer of Bartelso, Allan (Jeanette) Deiters of Breese, Theresa (Ken) Poettker of Centralia, and Clare (Jim) Gebke of Bartelso; grandchildren and great-grandchildren, John (Tammy) Beer and their children, Sophie, Heidi, and Henry; Joel (Sara) Beer and their son, Maddox; Stacey (Tim) Seipp and their children, Reese and Mason; Nichole (Chris) Horstmann and their children, Arabella and Lilyana; Kyle Poettker, Craig (Stefanie) Poettker, and Luke Gebke; two brothers, Alvin Deiters of Trenton, and Ralph (Kathy) Deiters of Breese; and two sisters-in-law, Rita Liening of Breese, and Betty Liening of Carlyle. In addition to his wife he was preceded in death by a sister, Leona Haar; a brother, Ferd Deiters; brothers-in-law and sisters-in-law, Joe Haar, Rita Deiters, Norma Deiters, Othmar Liening, Edgar Liening, John Liening, and Ed & Elvera Huene; and his father-in-law and mother-in-law, Bernard & Theresa Liening. Mr. Deiters managed the Egyptian Concrete plant in Centralia for over 30 years. After his retirement, you could find Butch outside, in his garden, or enjoying spending time and helping his family and friends. He was a member of St. Augustine Parish in Breese, and the Teamsters Local 50 in Belleville. Funeral Mass of Christian Burial will be held at 10 a.m. on Tuesday, June 20, 2017 at St. Augustine Catholic Church in Breese with Msgr. Jim Buerster officiating. Burial will follow at St. Dominic/St. Augustine Cemetery in Breese. Friends may call from 4 p.m. until 7 p.m. Monday, June 19, 2017 at Nordike Funeral Home in Breese and again from 8 a.m. until 9:45 a.m. Tuesday, June 20, 2017 at St. Augustine Catholic Church in Breese. Memorials may be made to the charity of the donor’s choice and will be received at the church or Nordike Funeral Home, 150 N. Clinton, Breese, IL 62230 who is serving the family.

The family of Robert H. "Butch" Deiters created this Life Tributes page to make it easy to share your memories.

Send flowers to the Deiters family.