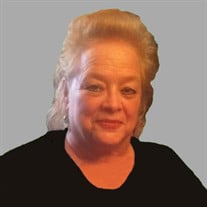 Rita Markus, 62, of Aviston, died Thursday, February 1, 2018 at St. Elizabeth Hospital in O’Fallon. She was born March 10, 1955 in Highland, the daughter of Carl and Mary Ann, nee Draper, Kapp. She married Dave Markus October 28, 1978 in Aviston and he survives in Aviston. In addition to her husband she is survived by her sister, Phyllis Kendall of Aviston; sisters-in-law and brothers-in-law, Carol Wieter, Bob & Polly Markus, Jim Markus, Ivan & Bonnie Markus, Sandy & Marlin Fix, Joan & Paul Jinks, and Roger Markus; and numerous nieces and nephews. In addition to her parents she was preceded in death by a sister-in-law, Kathy Markus; and two brothers-in-law, Willy Kendall and Paul Wieter. Mrs. Markus was retired civil service from Scott Air Force Base. She was a member of St. Francis Parish in Aviston; she loved the Christmas holiday season and painting ceramics. Funeral Services will be held at 12 p.m. Monday, February 5, 2018 at St. Francis Catholic Church in Aviston with Deacon Charles Litteken officiating. Burial will follow at St. Francis Cemetery in Aviston. Friends may call Monday, February 5, 2018 from 8:30 a.m. until time of services at St. Francis Catholic Church in Aviston. Memorials may be made to the American Cancer Society and will be received at the church or Nordike Funeral Home, 301 S. Clinton, Aviston, IL 62216 who is serving the family.

The family of Rita Markus created this Life Tributes page to make it easy to share your memories.