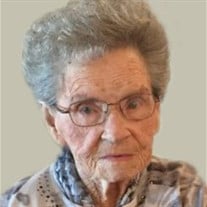 Rita B. Kalmer, 93, of Albers, died Friday, November 30, 2018 at Aviston Countryside Manor. She was born April 13, 1925 in Breese, the daughter of Bernard and Gertrude, nee Hellmann, Rakers. She married Victor A. Kalmer September 4, 1946 in... View Obituary & Service Information

The family of Rita B. Kalmer created this Life Tributes page to make it easy to share your memories.

Send flowers to the Kalmer family.