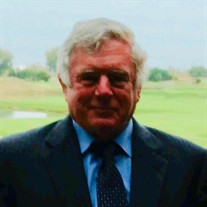 Richard Alfred Kuiken passed away at his home in Shattuc on December 17, 2018 after a brief illness. He is survived by his wife, Debbie (Underwood) Kuiken; his children Jennifer (Kuiken) Ourada, and Michael Kuiken; and his brother, Daniel Kuiken. Mr. Kuiken was born on September 20, 1945 in Pittsburgh, Pennsylvania, to Dr. Kenneth Kuiken and Lois (Blotter) Kuiken. He graduated from Christian Brothers High School in Memphis, TN in 1963, and obtained his Bachelor of Arts in English from the University of Illinois in 1967. He later obtained his Juris Doctor from the University of Illinois in 1970, and began practicing law that same year. Mr. Kuiken met his eventual wife, Debbie, during the summer of 1970 in Champaign, and the two married on August 12, 1972. Mr. Kuiken moved to Centralia in 1970 to accept a position with the Legal Assistance Foundation. Two years later, he moved into private practice, and by the mid-1970’s, he began his eponymous law firm, which he ran until he passed away, serving clients from all walks of life in a diverse array of legal matters. Mr. Kuiken was involved in a host of organizations and philanthropic endeavors throughout his lifetime. He obtained the designation of Eagle Scout; was a member of the Triangle Fraternity at the University of Illinois; served as president of the Clinton County Bar Association; was a past president and secretary of the Carlyle Rotary Club; served on the board of directors of the Clinton County Rehabilitation Center (now Community Link) for decades; served as an adviser to the Community Link early childhood development program for many years; volunteered with the Clinton County Cancer Society and Salvation Army; and was involved with numerous other organizations over his lifetime. Mr. Kuiken also devoted countless hours of his professional time to working on pro bono matters. Throughout his lifetime, Mr. Kuiken enjoyed many leisure activities, such as camping, traveling, bowling, canoeing, photography, wood carving, motorcycling, botany, horticulture, carpentry, reading, and learning. He owned and loved dogs his entire life. He possessed a brilliant intellect and was a voracious reader and seeker of knowledge and truth. Mr. Kuiken was a faithful, loyal, loving, caring, and wonderful husband. He was as fine a father as any children could ever hope to have. His wife, brother, and children were incredibly fortunate to have known him. His family will carry his memory with them for all of their lives, and will never forget the example he set for them and the love, care, and empathy he provided. His children will strive to live up to his legacy. Though he will be missed, Richard Kuiken will always be loved, and will never be forgotten. Funeral services will be held at 10:00 AM on Saturday, December 22, 2018 at Nordike Funeral Home in Carlyle. Interment will follow at Carlyle Township Cemetery. Visitation will be held on Friday, December 21, 2018 from 5:00 until 8:00 PM on Friday with a eulogy service beginning at 7:00 PM. In Lieu of flowers memorials are suggested to St. Jude Children’s Hospital, Community Link, St. Louis NPR or the Clinton County Humane Society and will be received at Nordike Funeral Home in Carlyle. Online condolences may be made to the Kuiken family by visiting www.nordikefuneralhome.com

Richard Alfred Kuiken passed away at his home in Shattuc on December 17, 2018 after a brief illness. He is survived by his wife, Debbie (Underwood) Kuiken; his children Jennifer (Kuiken) Ourada, and Michael Kuiken; and his brother, Daniel Kuiken.... View Obituary & Service Information

The family of Richard Alfred Kuiken created this Life Tributes page to make it easy to share your memories.

Richard Alfred Kuiken passed away at his home in Shattuc on December...

Send flowers to the Kuiken family.