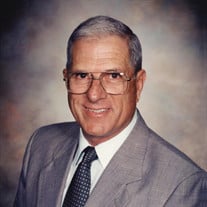 Richard “Dick” Wayne Koehler, age 88 of Carlyle, passed away on Sunday, Feb. 7, 2021 at Cedarhurst Living Center in Breese. He was born in Carlyle, IL on Sept. 15, 1932 the son of Edward and Irene (Gallatin) Koehler. He married Frances Kohrs in Breese, IL on Oct. 10, 1951, and she survives in Carlyle. In addition to his wife of 65 years, he is survived by his children: Debbie Boehne and husband Marvin of rural Centralia and Craig Koehler and wife Amy of Breese; his grandchildren: Klete Boehne and wife Angie, Andrew Koehler and wife Ellie, Ashley Ehlers and Bryan, Greg Taplin and Mariela; great grandchildren: Alex and Claire Boehne, Emma Vinny, Hattie Ehlers, Riley, Winston, and Leona Koehler; his sister, Etta Mae Lien, and husband Hilmer of Breese. He was preceded in death by his mother, father, and a sister, Peggy Koehler. Dick attended Carlyle High School and served in South Korea during the Korean Conflict. After his service in the United States Army, he was employed in various jobs. He started his career in law enforcement with the Carlyle Police Department for several years, and then worked for the Illinois Department of Natural Resources as a Conservation Police Officer. He retired from IDNR after 24 years of service. After retirement he served in volunteer positions with the Carlyle Cemetery Association, First United Methodist Church of Carlyle and the Scott Masonic Lodge 79 in Carlyle. He was a proud Shriner and member of the American Legion and the VFW, where he served on the Honor Guard for many years. Dick ran the clock for the Carlyle High School football and basketball teams for decades. Dick also coached the American Legion Baseball team for numerous years. He enjoyed hunting, fishing and was an avid sports fan. He and his wife were big supporters of the Carlyle High School Sports Boosters. They loved to travel throughout the US, Canada, and Germany and made many lifelong friends along the way. He always enjoyed spending time with his family and friends. A graveside service for the family will be held at 11:00 a.m. on Saturday, Feb. 13, 2021 at the Carlyle Township Cemetery with full military honors accorded. All attendees are asked to meet directly at the cemetery. Facemasks will be required and all are asked to follow social distancing guidelines. Memorials made in memory of Richard are suggested to the CHS Booster Club, Christmas in Carlyle or the Alzheimer's Association and will be received at Nordike Funeral Home, 740 Fairfax Street, Carlyle, IL 62231.

The family of Richard "Dick" Koehler created this Life Tributes page to make it easy to share your memories.

Send flowers to the Koehler family.