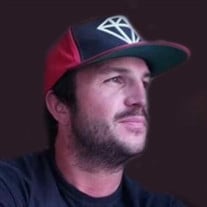 Randy Jason Linthicum, 37 of Lake Elsinore, California entered the arms of Jesus on Sunday, November 25, 2018. Randy was born Tuesday, March 31, 1981 in Van Nuys, California. He was the son of Randy Linthicum & Roxanne (Linthicum) Snider. Randy accepted Jesus Christ as his savior when he was ten years old and knew upon leaving this world he would be in the presence of the Lord for eternity. As a child, he enjoyed activities such as camping and several water sports on the various rivers and streams where he grew up in Middleburg, Florida. Randy was also in the Boy Scouts and achieved the rank of “Life”. When he was 15, his family moved to San Diego, CA where he graduated in 1999 from Scripps Ranch High. Randy loved surfing with his friends at the beaches of Del Mar and Scripps La Jolla. Randy resided in Phoenix, AZ over the majority of the last 15 years where he made many friends inside the Drum & Bass music community. He loved to DJ and performed under the name “Risky Business”. Music was an important part of his life and a special bond he shared with many people that loved him within this community. Before moving to Lake Elsinore, Randy recently spent time with his father in New Baden, Illinois where he, once again, made several friends in town. He particularly enjoyed playing cards every morning with his dad at the civic center and looked forward to joining in the days’ topic of conversation. He occasionally joined his father to deliver meals to seniors in the surrounding communities. He loved spending time with his Uncle Jerry and Aunt Brenda and attending Wesclin High basketball games. To his family and friends who knew him well, Randy was kind, funny, quick witted, good natured, intelligent, generous and loving. He was interested in a wide variety of subjects and was admired for his ability to speak intelligently on the topics that were important to him, due to his love of learning and curiosity about the world. He leaves behind his father, Randy Joe Linthicum, Mother, Roxanne Sawyer Snider, Step father, Kevin Snider, half-brothers, Elton and Jeremy Linthicum, and his loving girlfriend Lauren Holden. Memorial Services will be held at 10 a.m. Friday, December 7, 2018 at Nordike Funeral Home in New Baden. Visitation will be held from 9 a.m. until time of services on Friday, December 7, 2018 at Nordike Funeral Home in New Baden. Memorials in memory of Randy can be made to the charity of the donor's choice and will be received at the funeral home.

The family of Randy Jason Linthicum created this Life Tributes page to make it easy to share your memories.

Send flowers to the Linthicum family.