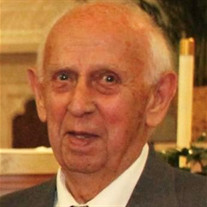 Philip Robert of Carlyle peacefully passed away at his home surrounded by his family on Saturday, December 29, 2018 at the age of 88 years. He was born in Carlyle on December 28, 1930, the son of Ronan and Sevilla (Kleber) Robert. He married Ellen Newkirk on January 10, 1951 in Carlyle and she preceded him in death on June 17, 2015. Philip is survived by his children: Jean Parson and husband Rick and Gary Robert and wife Debbie all of Carlyle; grandchildren: Shawnna Yashar and husband David, Tyler Robert and wife Erin, Stacy Pepper and husband Thomas and Shannon Petrea and husband Tony; great grandchildren: Zachary Yashar, Elise Yashar, Grant Yashar, Ben Robert, Nick Robert, Drew Robert, Audrey Pepper, Carson Petrea, and Olivia Pepper; step great grandchildren: Thomas Pepper and Mason Pepper; his brother: John (Mary Lou) Robert of Carlyle. In addition to his wife and parents he was preceded in death by his brothers, William Robert and Earl Robert; and his sister Betty (Willard) Robert. Philip, along with his brother Bill, operated the Shell gas station in Carlyle for 20 years. He was a self-proclaimed East End River Rat growing up and was proud of that fact his entire life He was a founding member of the Sportsman’s Club, he enjoyed hunting, fishing and being outdoors. Philip was a gardener and extremely proud of the tomatoes he was able to grow. Other hobbies included playing cards and horse racing. Above all, he loved spending time with his children, grandchildren, and great grandchildren. A Memorial Service will be held at 11:00 A.M. on Thursday, January 3, 2019 at Nordike Funeral Home in Carlyle with Fr. George Mauck officiating. Interment will follow at St. Mary Catholic Cemetery in Carlyle. Friends may visit with the Robert family at the Nordike Funeral Home in Carlyle on Wednesday, January 2, 2019 from 5 to 7:00 P.M. or on Thursday from 10:00 A.M. until the time of services. In lieu of flowers, the family asks that memorials be made in Philip’s memory to the St. Ann Altar Sodality and those will be received at the Nordike Funeral Home in Carlyle.

Philip Robert of Carlyle peacefully passed away at his home surrounded by his family on Saturday, December 29, 2018 at the age of 88 years. He was born in Carlyle on December 28, 1930, the son of Ronan and Sevilla (Kleber) Robert. He married... View Obituary & Service Information

The family of Philip Wayne Robert created this Life Tributes page to make it easy to share your memories.

Philip Robert of Carlyle peacefully passed away at his home surrounded...

Send flowers to the Robert family.