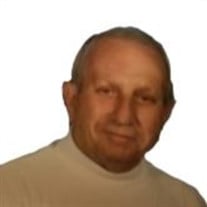 Philip M. “Mel” Lee, 92, of New Baden, died Wednesday, October 21, 2020 at St. Elizabeth Hospital in O’Fallon. He was born June 27, 1928 in Shattuc, the son of Ancil and Dixie, nee Shepard, Lee. He married Betty A. Kuhn February 11, 1956 at St. George Church in New Baden and she preceded him in death on September 9, 2016. Mel is survived by two daughters, Nancy Penwell and Wendy (John) Wagner; three grandchildren, Guy (Lori) Penwell, Sean Schaeferle and Danielle (fiancé, Zach Jennings) Schaeferle; two great-grandchildren, Chas & Milo Penwell; a brother-in-law and sister-in-law, Ernie & Wilma Kuhn; and many nieces and nephews. In addition to his wife and parents he was preceded in death by a son-in-law, Park Penwell; a brother, Wayne Lee; his father-in-law and mother-in-law, Herman & Minnie Kuhn; and sisters-in-law and brothers-in-law, Mary Lee, Florence & Buddy Mueller, Joseph & Jane Kuhn, Cornelius & Marie Kuhn, and Dennis & Janet Kuhn. Before his retirement, Mr. Lee was a Superintendent at General Motors. He was a veteran of the United States Navy, and a member of St. George Parish in New Baden. In his younger years, Mel along with his wife helped coach many of his children’s youth sports teams, specifically softball. Mel and Betty were snowbirds for several years, spending many winters in Florida. Due to the Covid-19 Pandemic, private family only services will be held. Memorials may be made to Missionary Association of Mary Immaculate 9480 N. De Mazenod Drive, Belleville, IL 62223 and will be received at the Nordike Funeral Home, 15 E. Hanover St., New Baden, IL 62265 who is serving the family.

The family of Philip M. "Mel" Lee created this Life Tributes page to make it easy to share your memories.

Send flowers to the Lee family.