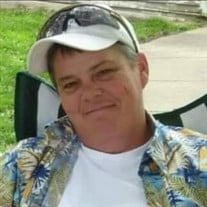 Pamela Ann Masterson, age 55, peacefully passed away and entered the presence of the Lord on Thursday, February 4, 2021 at St. Elizabeth's Hospital surrounded by her family. Pam was born May 25, 1965 in New Baden, IL, the daughter of Norma Jean (nee Dall) Masterson and Bobby Eugene “Gene/Matt” Masterson. Her mother Normie passed away April 15, 1973 but God chose to bless Pam with the best stepmom ever, Diane (nee Santel) Masterson. Pam lived in Mascoutah, IL with her BFF C.J. Docherty. She also leaves behind her parents along with siblings, Sara (Bill) Holtgrave, Ann (Kevin) Kalmer, Randy (Dar) Masterson, and Lisa (Don Dove) Masterson; as well as nieces and nephews, Levi Holtgrave, Amber (Mehdi) Kalmer, Zach (Sommer) Kalmer, Lily (Jacob) Masterson, Andrae Masterson, and Amanda (Joe) Sapienza; great nephew, Tyler Masterson; great niece, Hailey Sapienza; and many cherished aunts, uncles, cousins, and friends. Pam will be welcomed Home by her #1 Mom, Normie; her grandparents, Margaret & Ted Dall, Clem & Sarah Santel, and Truman & Abbie Masterson; aunts and uncles, Mary “Snookie” Loepker & Dick Book, Judy & Ron Singler, and Jessie Mills; as well as some pretty awesome friends, cousins, and extended family. Pam never met a stranger and was certainly a force to be reckoned with on things she was passionate about. She loved the outdoors, fishing, and played a mean game of kickball. She cared deeply for animals; and given the chance, she would have brought them all home. Pam signed up to be an organ donor and was able to help more than 75 potential recipients as a result. Her parents and siblings would like to welcome friends, neighbors, and all extended family to attend a brief visitation at Nordike Funeral Home in New Baden on Saturday, February 13, 2021 from 11 am to 1 pm followed by a graveside service at Resurrection Cemetery in New Baden and a luncheon at the American Legion in New Baden. In lieu of flowers, the family would like to invite you to donate to coping4life (www.coping4life.com) or the Clinton County Humane Society (http://ccilhs.org).

Pamela Ann Masterson, age 55, peacefully passed away and entered the presence of the Lord on Thursday, February 4, 2021 at St. Elizabeth's Hospital surrounded by her family. Pam was born May 25, 1965 in New Baden, IL, the daughter of Norma Jean... View Obituary & Service Information

The family of Pamela Ann Masterson created this Life Tributes page to make it easy to share your memories.

Send flowers to the Masterson family.