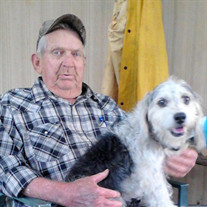 Norman “Punk” Oulson, 85, of Keyesport, died Friday, September 21, 2018 at his home. He was born January 24, 1933 in Godfrey, the son of Willard and Mae, nee McFarland, Oulson. He married Frances Rogillio and she preceded him in death. Punk is survived by two daughters, Frances (Eugene) Harris of Keyesport, and Donna (Steve) Carrel of Tucson, AZ; four grandchildren, Chod McClintock, Jennifer McClintock, Shana Fifer, and Jason (Amy) Harris; five great-grandchildren, Dakota McFarland, John David Harris, Cheyenne Fifer, Brailynn Harris, and Emma McClintock; and his siblings, Alice, Juanita, Robert, and Soc. In addition to his parents and wife, he was preceded in death by two brothers and a sister. Mr. Oulson was a truck driver; a veteran of the United States Army; and he loved fishing. Graveside Services will be held at 2 p.m. Sunday, September 30, 2018 at McKendree Chapel Cemetery in Keyesport with Bruce Sasse officiating. Memorials may be made to the charity of the donor’s choice and will be received at Nordike Funeral Home, 740 Fairfax St., Carlyle, IL 62231 who is serving the family.

The family of Norman "Punk" Oulson created this Life Tributes page to make it easy to share your memories.

Send flowers to the Oulson family.