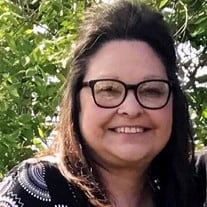 Nell Rose Southard, 56, of New Baden, died Friday, August 3, 2018 at Barnes-Jewish Hospital in St. Louis, MO. She was born December 29, 1961 in Harrisburg, the daughter of Jacob and Doris, nee Johnson, Whitecotton. She married John Southard on August 7, 1993 in Nashville and he survives in New Baden. In addition to her husband she is survived by her children, Jacob “Hank” Southard and Katelyn Southard both of New Baden; her mother, Doris Whitecotton of Duquoin; her mother-in-law, Edna Southard of New Baden; her sister, Cindy Adams of Carbondale; brothers-in-law and sisters-in-law, Ralph & Dixie Southard, Pamela & Bill Latham, Leslie & Greg Sweet, and Richard Southard; as well as many loving nieces and nephews. In addition to her father she was preceded in death by her father-in-law, Henry Southard. Nell Southard first and foremost was the most dedicated, loving, and caring daughter, wife, and mother of two. The love and devotion she put forth towards her family will go unmatched. One would think that would be enough for one woman to share in her lifetime, but Nell did not stop there. Her love and care for her own animals and other animals only enhanced their lives. As if that was enough her tireless energy to inspire, engage, and enhance the lives of her students at Community Consolidated School District 204. Here she was a teacher for 34 years where any task she was faced with was accomplished with inbound enthusiasm. Her energy and love spread throughout the school, her coworkers, and peers. They watched as she was able to touch the lives of even the most challenging children. To say she was amazing is only touching the surface of her ability to change and mold the lives of others around her. Funeral Services will be held at 10 a.m. Wednesday, August 8, 2018 at Nordike Funeral Home in New Baden. Burial will follow at Greenmount Cemetery in New Baden. Visitation will be held Tuesday, August 7, 2018 from 4 p.m. until 8 p.m. and again on Wednesday, August 8, 2018 from 9 a.m. until time of service at Nordike Funeral Home in New Baden. In lieu of flowers, memorials may be made to Partners for Pets or the Clinton County Humane Society and will be received at the funeral home.

The family of Nell Rose Southard created this Life Tributes page to make it easy to share your memories.

Send flowers to the Southard family.