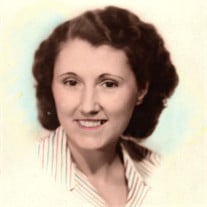 Mildred Neoma Tracy, age 93 of Carlyle passed away peacefully on Sunday, August 21, 2016 at Carlyle Healthcare Center with her loving family at her bedside. She was born in Irishtown Township on July 15, 1923, the daughter of Allie Roy and Dollie Jane (Carroll) Higgins. Mildred married George Tracy on March 29, 1941 in St. Louis, Missouri and he preceded her in death on September 13, 1993. In addition to her parents and husband, Mrs. Tracy was preceded in death by her daughter Joyce Quidgeon and husband Hap; her son Michael Tracy and wife Jill; two grandchildren: Cindy and Tracey Smith; great grandson-in-law Kevin McCord; five brothers and four sisters, Roy Higgins, Everet Higgins, Elmer Higgins, Delbert Higgins, Gerita Miller, Thelma Cohoon, Louise Zinn, Paul Higgins and June Sheets; Mildred is survived by her son, Darren Tracy of Carlyle; her sister, Lucille Krieger of Carlyle; a sister-in-law, Clara Higgins of Kansas City, Kansas; six grandchildren: Tonya Nettles and husband Jimmy of Carlyle; Rich Quidgeon of Damiansville; Sean Quidgeon of Greeley, Colorado; Chris Quidgeon and wife Rae Ann of Centralia; Colin Michael Tracy and wife Jodi, and Lori Elwell and husband Steve, both of Murphysboro; sixteen great grandchildren and seventeen great- great grandchildren; numerous nieces, nephews, friends and neighbors; and her caregivers and close friends, Nelda Hunter and Martha Price. Mrs. Tracy loved the Lord. She was baptized in the Kaskaskia River and continued to be devoted to the Lord throughout her life. To say that Mildred was a “homemaker” is an understatement; she was a faithful wife and devoted mother. She was a master seamstress - everything she created or fixed was hand sewn. Mildred was an incredible cook and was best known for her apple pies. She was an avid reader, often times she would start a book in the morning and not put it down until she had finished reading every page. More than anything, she loved her grandchildren, great grandchildren and great-great grandchildren; they were her life and her joy. Funeral services will be held at 10:00 AM on Wednesday, August 24, 2016 at Nordike Funeral Home in Carlyle with Rev. Jason McIntosh officiating. Burial will follow at Carlyle Township Cemetery. Visitation will be from 4 until 8:00 PM on Tuesday, August 23, 2016 at Nordike Funeral Home in Carlyle and on Wednesday from 8:00 AM until the time of services at the funeral home. Memorials in honor of Mildred are suggested to the Alzheimer’s Association, Case-Halstead Library or the charity of donor’s choice and will be received at Nordike Funeral Home, 740 Fairfax Street, in Carlyle.

Mildred Neoma Tracy, age 93 of Carlyle passed away peacefully on Sunday, August 21, 2016 at Carlyle Healthcare Center with her loving family at her bedside. She was born in Irishtown Township on July 15, 1923, the daughter of Allie Roy and... View Obituary & Service Information

The family of Mildred N. Tracy created this Life Tributes page to make it easy to share your memories.

Send flowers to the Tracy family.