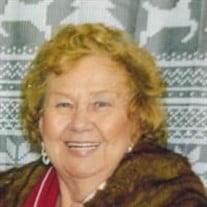 Mary Margaret Heimann Floyd Thompson, age 84, of Daphne, Alabama and formerly Aviston, Illinois, passed away peacefully on Monday, February 24, 2020 in Pensacola, Florida. Mary was born March 21, 1935 in the family farmhouse north of Aviston, a daughter of the late John "Jack" B. and Mary Louise, nee Pittman, Heimann. In addition to her parents and several siblings (Jerome, David, Barbara Nichols, John, and Carl), Mary was preceded in death by her husband Ralph "Tom" Thompson (married from 1981 until his death in 1986), Francis "Fritz" Armstrong (d. 2012), infant daughter Susan Marie Floyd (d. 1956), and daughter Mary Beth Floyd (d. 1978), as well as sister-in-law Verena Heimann and brother-in-law Arthur Nichols. Mary became the first bride from her Aviston High School class of 1953, when in June of that year she married William G. "Bill" Floyd at Saint Francis Church in Aviston, and went on to have ten children with Bill (d. 1980), eight of whom survive her. Mary was a young Air Force wife, and lived at times during those years in Illinois, Texas, and her husband's home state of South Carolina, where the family lived for 15 years. Mary supported her family always, and worked in South Carolina farming tobacco with her husband, on a factory assembly line, as a secretary in St. Andrew Catholic elementary school in Myrtle Beach, and later in various federal government positions in St. Louis. Later after remarrying, Mary moved to south Alabama and continued in civil service and retired as an administrative assistant in the U.S. Attorney's Office in Mobile, Alabama. Mary's hobbies included gardening, genealogy, traveling to visit family, and golf. Mary was a longtime volunteer of Daphne Public Library in Alabama. Mary is best remembered for her love of family, her advocating for education, an appreciation of the moment, and a keen sense of humor. Surviving are her children and daughters-in-law, Scott (Nancy) Floyd of Atmore, AL, Mark (Rhonda) Floyd of Columbia, SC, John Floyd of Lebanon TN, Jim Floyd of Marietta, GA, Christine Martin of Daphne, AL, Ben Floyd of Atlanta, GA, Paul (Kristy) Floyd of Fairhope, AL, and Matt (Beth) Floyd of Johns Creek, GA; 17 grandchildren ranging from 45 years to 9 years old, 22 great grandchildren, as well as so many other beloved souls over the years for whom Mary was Meemaw, Aunt Mary, cousin Mary, or they were a child of her heart; sisters Helen (Jerry) Middeke of Aviston, IL and Eileen Reid of Charlottesville, VA, and brother Bob (Fran) Heimann of Greenville, IL, and sisters-in-law Johanna Heimann of St. Louis, MO and Ellen Heimann of Sun City, AZ. A Memorial Mass will be celebrated at 10:00 AM on Friday, July 31, 2020 at St. Francis Catholic Church in Aviston. Interment will follow at St. Francis Catholic Cemetery in Aviston. Everyone is required to wear a mask if attending mass. In lieu of flowers, plants, and other gifts, memorials may be made to Mater Dei Catholic High School Foundation, Breese, Illinois, in loving memory and grateful recognition of all Mater Dei has done in educating our family. Memorials will be received at church or at Nordike Funeral Home in Aviston.

The family of Mary Margaret Thompson created this Life Tributes page to make it easy to share your memories.

Send flowers to the Thompson family.