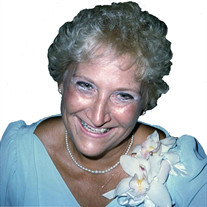 On Monday morning, the Second of October 2017, Mary Ann Schmitz quietly passed away at St. Joseph’s Hospital in Breese, Illinois. And aside from that final act, very little of Mary Ann’s life could be considered quiet or passive. Born in Breese Illinois as one of six children to Veronica (Hoh) and Anton Benhoff, Mary Ann was raised a hard-working farm girl and graduated from St. Mary’s High School in 1951. On April 22nd, 1953 she and Don were married and embarked on a life’s journey that would last 64 years. Mary Ann and Don lived in San Francisco for a time while Don served in the US Army, started their family in a mobile home along Route 127 in Carlyle, then built their forever home at 1090 Marion Street, a place filled with family love and incredible memories to this day. Mary Ann loved her children with all her heart, and played golf at every opportunity. She passed on her love of the game to each of her kids and later to many of her grandchildren. She loved to follow St. Louis Cardinals baseball and, like many of us, would yell at the TV when they played poorly. Mary Ann and Don shared a love of plants and landscaping, and their house has flowers and greenery year-round. When her oldest son Gary chose to attend Mater Dei Catholic High School in Breese, another lifelong passion was ignited. Mary Ann attended the Holiday Tourney at MD for decades, followed the activities of her children and grandchildren at Mater Dei to include her youngest grandchild that is still a student there. Mary Ann cheered at football games from the time Gary played his first freshman game in 1972, and she served as President of the MD Mothers and Friends organization. In 1976 Mary Ann was hired at the Monterey No. 2 mine in Albers and worked underground as a Motorman for the next eleven years. Her years in the UMWA were tough physically and mentally, as she was one of the first women hired in what had always been considered ‘men’s work’ at the Albers mine. She is survived by her husband Donald W. Schmitz of Carlyle, three children and their spouses (David and Mary Jo Schmitz of Denver, CO., Cindy Feldmann of Aviston, and Kurt and Jackie Schmitz of Aviston). There are nine grandchildren that loved her as “Nana” - Megan (Brandon) Holtmann of Aviston; Erin (Eric) Perry of Nashville, TN; Adam Schmitz (friend Zoë) of Chicago; Zachary Schmitz (friend Jess) of St. Louis; Beth Feldmann (friend Nick) of Denver; and Sam Schmitz, Ben Feldmann, Nick Schmitz and Hannah Schmitz of Aviston. Nana also loved seeing her two great grandchildren, Zoey Holtmann and Alan Perry. Mary Ann is also survived by three sisters-in law (Ruth Schmitz, Aggie Benhoff and Dorothy Stanfa). Preceeding her in death were each of her siblings (Leonard, Marcella, Dorothy, Sylvester and Anthony), in-laws Roger Schmitz and Darlene D’Amico. On September 11, 1978 Mary Ann and Don’s oldest son Gary Schmitz passed away in Omaha, a tragic event that would forever impact Mary Ann. She loved him and missed him dearly every day for the rest of her life. They have met again in Heaven, most certainly. A Funeral Mass of Christian Burial will be held on Friday, October 6, 2017 at 10:00 AM at St. Francis Catholic Church in Aviston. Interment will follow at St. Mary Catholic Cemetery in Carlyle. Visitation will be held from 5:30 until 8:00 PM on Thursday, October 5, 2017 at Nordike Funeral Home in Carlyle and on Friday from 9 until 9:45 AM at St. Francis Catholic Church in Aviston. Expressions of sympathy made in memory of Mary are suggested to Mater Dei High School and will be received at Church or at Nordike Funeral Home, 740 Fairfax Street, Carlyle, IL 62231. Online condolences may be left for the Schmitz family by visiting www.nordikefuneralhome.com

On Monday morning, the Second of October 2017, Mary Ann Schmitz quietly passed away at St. Joseph&#8217;s Hospital in Breese, Illinois. And aside from that final act, very little of Mary Ann&#8217;s life could be considered quiet or passive.... View Obituary & Service Information

The family of Mary Ann Schmitz created this Life Tributes page to make it easy to share your memories.

On Monday morning, the Second of October 2017, Mary Ann Schmitz...

Send flowers to the Schmitz family.