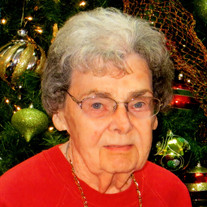 On September 18, 2016, Mary Jane “Sig” Pfeiffer decided to leave this Earth and join her loved ones, especially her husband Kenneth, son Kent, and daughter-in-law Jackie. Mary spent 90 years being a loving and lovely lady. She was a wonderful wife, mother, aunt, grandmother, great-grandmother, friend, and neighbor. She was born to Bill and Cora (nee Luehm) Siegrist on February 26, 1926, who precede her in death. She married Kenneth G. Pfeiffer on March 26, 1949, a union which lasted 57 years until his death in 2006. They had two children, Kent and Susy. Kent and his wife Jackie passed away in 1993. Mary was also preceded by her brother and sister-in-law, Dick and Betty Siegrist of Carmel, CA; and her in-laws, Gilbert and Annie Pfeiffer of New Baden. Mary grew up in Highland, graduating from Highland High School in 1944. She then spent two years in California, moved back home, and married Kenneth. They first lived in East St. Louis, and in 1959 moved to the Pfeiffer farm in New Baden where she spent most of her life. Outside, she helped on the farm, though Kenneth never allowed her to drive a tractor. Inside, she excelled at baking (Kenneth loved his desserts), sewing, embroidery, knitting, and many other crafts. There were also the other tasks of a farm wife such as cooking (which she hated), the yard and garden, canning, freezing, etc., and motherly duties. Aside from the farm, Mary worked at Ben Franklin in Mascoutah and later for Norcross and Hallmark as the greeting card lady at Famous Barr and other stores. She made many long-lasting friends while doing her cards, especially her “other daughter” Darlyne Newingham. After Kenneth died, Mary moved to the Grand Manor, a retirement home in Swansea, for 9 years. The last year or so at the Grand Manor, she was taken care of by Tiggre Hudson, a wonderful CNA. Thank you so much Tiggre. A heart attack in July 2015, and resultant advanced dementia brought her to the Dammert Geriatric Center for a year. The staff there took loving and exceptional care of Mary and kept her spoiled with her passion – ice cream. God, be forewarned: Her favorite flavor is chocolate. You better stock up! Mary is survived by her loving family; daughter, Susy (Donnie) Rafalowski of Smithton; grandchildren whom she loved to pieces, Jill (Dan) Baudendistel of Swansea and Luke Rafalowski of Burbank, CA. She also has two stinkers (great-grandchildren), Elsa and Liesl Baudendistel. Mary is also survived by a sister-in-law, Betty Osborne; nieces and nephews, Beth and Walt, and Gretchen, Alan, and Scott; her Grand Manor family, her Dammert family, and many friends and neighbors who loved her. She will be dearly missed by all. The family would like to thank Dammert Geriatric Center and HSHS Hospice for their wonderful care to Mary. Friends may call Thursday, September 22, 2016 from 5 p.m. until 8 p.m. at Nordike Funeral Home in New Baden and again on Friday, September 23, 2016 from 10 a.m. until 11 a.m. at Apartment Community Chapel at the Shrine of Our Lady of the Snows, 726 Community Drive, Belleville, IL 62223. A Funeral Mass will be held at 11:15 a.m. Friday, September 23, 2016 at Apartment Community Chapel at the Shrine of Our Lady of the Snows. In lieu of flowers, memorials may be made to the Alzheimer’s Association and will be received at the funeral home. SEE YOU LATER ALLIGATOR. WE LOVE YOU.

On September 18, 2016, Mary Jane &#8220;Sig&#8221; Pfeiffer decided to leave this Earth and join her loved ones, especially her husband Kenneth, son Kent, and daughter-in-law Jackie. Mary spent 90 years being a loving and lovely lady. She was... View Obituary & Service Information

The family of Mary Jane "Sig" Pfeiffer created this Life Tributes page to make it easy to share your memories.

Send flowers to the Pfeiffer family.