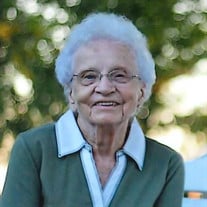 Martha Alice “Mutze” Altgilbers died at Aviston Countryside Manor on Saturday, December 19 2020, at the age of 93 years. She was born in Aviston, IL on August 14, 1927, to Nicholas and Margaret (Urban) Strubhart. On July 5th, 1947 she married Marcellus John “Caesar” Altgilbers in Aviston, IL, who proceeded her in death. Mutze graduated from Aviston High School and before her marriage worked at Krebs Photo Studio in Breese and Fermin Des Loge Hospital. When her youngest child was in grade school, she began working at Aviston Elementary School, first in the cafeteria and later as the library clerk. She was a long-time member of the Ladies Sodality of St. Francis Parish in Aviston and volunteered with the St Joseph’s Hospital Breese Auxiliary. Mutze was past president of American Legion Mondt-Lampe Post 1239 Ladies Auxiliary. She was an active quilter and helped make many quilts that were donated to St. Francis Parish for the annual church picnic and ensured that each of her children and grandchild had one. She greatly enjoyed playing cards and dominos with her many friends and family and was always ready to join her grand kids in playing games of all kinds. In addition to her husband she was proceeded in death by her parents; her father-in-law John Altgilbers and mother-in-law Anna Altgilbers; brothers Charles (Margaret), James (Marilyn), Paul (Marcella), Xavier, Nicholas and Thomas Strubhart; brothers-in-law Norbert (Aggie) Altgilbers, and Roman (Medrie) Altgilbers, Frances Frey, and Joseph Salemi; sisters-in-law Adelaide (Hans) Wilken and Elizabeth (Barnard) Lampe, and grandson Nicholas Altgilbers. She is survived by her daughters Marge (Lee) Marek and Monica Schuyler; sons Mike (Mary) Altgilbers, Tom (Kathy) Altgilbers, and Don (Judi) Altgilbers; grandchildren Jessica (Stephen) Cox, Ian (Tara) Altgilbers, Leah (Jason) Fleming, Dylan (Sarah) Altgilbers, Jordan (Lindsay) Altgilbers, Mikayla (fiancé Thomas Saunders) Altgilbers, Landon Altgilbers, Ann Altgilbers, Ben (Kathy) Altgilbers, Jennifer (Isaiah) Farris, Aaron (Jamie) Altgilbers, Robert (Kelsey) Altgilbers, Caleb (Zoey) Schuyler, Nathanial Schuyler and 33 great grandchildren. She also leaves behind her sisters, SSND Marie Virginia Strubhart, Gertrude Frey and Elizabeth Salemi; sisters-in-law Dolores Strubhart and Erlene Strubhart, Marita Strubhart and many nieces and nephews. Memorials may be made to Activity Department at Aviston Countryside Manor, Alzheimer’s Association, and St. Francis Parish in Aviston. A Funeral Mass of Christian Burial will be held at 10:00 AM on Tuesday, December 22, 2020 at St. Francis Catholic Church in Aviston with Fr. Dan Friedman officiating. Interment will take place at St. Francis Catholic Cemetery in Aviston. There will be a limit of 100 people at the church for Mass and everyone in attendance will be required to wear a face mask. Friends may call from 5:00 until 7:00 PM on Monday, December 21, 2020 and 9:00 until 9:45 AM on Tuesday, December 22, 2020 at Nordike Funeral Home in Aviston. All in attendance are asked to please wear a face mask and refrain from handshakes and hugs. Online condolences may be left for the Altgilbers family by visiting www.nordikefuneralhome.com.

The family of Martha A. "Mutze" Altgilbers created this Life Tributes page to make it easy to share your memories.

Send flowers to the Altgilbers family.