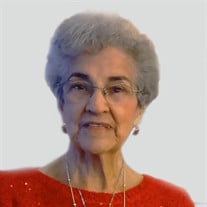 Maria “Marie” Theresa Hecker, nee Hernandez passed away peacefully on September 27, 2017 at Faith Countryside Homes in Highland Illinois. Her roots laid in humble beginnings in Jalisco Mexico. She was born in St. Louis Missouri on September 12, 1932 when her parents Hijinia and Jose Hernandez came to America with the dream of a better life. Because of the sacrifice and hard work of her parents, Marie never once took being an American for granted. She was raised in East St. Louis Illinois and graduated from St. Teresa’s Academy in 1951. The quote chosen by classmates to describe her read, “She was a phantom of delight when first she appeared upon our sight.” Indeed she must have been a phantom of delight when she first attracted the attention of and later married the love of her life, Donald L. Hecker on October 18, 1958. She chose to be a stay-at- home mom because she believed that children needed daily guidance. She was a woman of many talents. Marie was a self-taught seamstress and made many dresses, including her evening gowns, her wedding dress and later on, matching outfits for her children. She also made her own hats that were the envy of the town. She loved music and played the piano for her own amusement, and she and her older sister Carmen gave many ‘dueling piano’ ragtime recitals in St. Louis. She also sang in the choir of every church of which she was a member: St. Philip’s in East St. Louis for 17 years, St. Teresa’s in Belleville for 22 years (in 1987 the choir earned a trip to Rome to sing for Pope John Paul II, as well as many of the most significant Cathedrals in Italy- Milan, Florence, Sienna and Pisa) and St. George’s in New Baden for 15 years. A self-taught artist, she was a member of the Gateway East Artist’s Guild for decades and was a local award winning juried artist. She spent hours working on art projects with her children because she thought an idle mind was the devil’s workshop and shunned hours wasted in front of the television. True to her Mexican heritage, she was an excellent cook- particularly authentic Mexican food and the best fried chicken. She was dubbed “Mother Tums” by many who came for a meal because she would hand out rolls of Tums as they left, worried that they would have indigestion from the spicy food. Her favorite role of all was being ‘Abuelita’ to grandchildren Collin, Caitlin, Keeley and Derek. There was never a better day than when the grandchildren came for a visit. She enjoyed the laughter and antics. Marie is preceded in death by parents Hijinia and Jose Hernandez, son Michael Hecker, siblings Dorothy Hernandez, Carmen Haas, Simon Hernandez. She is survived by her husband of nearly 59 years, Donald, children Donna Hecker, Dan Hecker (Teresa), Kevin Hecker (Beth) and grandchildren Collin, Caitlin and Keeley Hecker, and Derek Mitchell, and siblings Louis (Sandy) Hernandez, Joe Hernandez, Vicki (Steve) Peterman and Virginia (Bill) Vandeloo. Our entire family wishes to thank all of the employees at Hospice of Southern Illinois for their kind, diligent and compassionate care. Funeral services will be held on Saturday October 7, 2017: Visitation 9am-11:00am, Catholic Mass at 11:00am at St. George’s Catholic Church in New Baden, IL. In honor of her heritage and in celebration of her life, a Mexican Fiesta Luncheon will follow at St. George’s Church Hall. Private Burial for immediate family only. In lieu of flowers, memorial gifts may be made to Hospice of Southern Illinois.

The family of Maria "Marie" Theresa Hecker created this Life Tributes page to make it easy to share your memories.

Send flowers to the Hecker family.