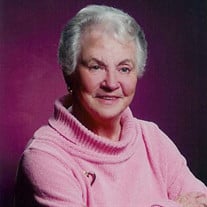 The spirit of Marcella Agnes Knapp left her earthly body at 80 years old, on July 19, 2017, in St. Louis, Missouri. She was born October 20, 1936, as the youngest of 13 children to Joseph and Elizabeth (Aarns) Koch, Marcella was a lifelong resident of Beckemeyer, IL. For the past 60 years, she was a member of her monthly Card Club, which they hosted in their homes on a rotating basis. Marcella played Bunco, and enjoyed the companionship of her fellow Beckemeyer Red Hat Ladies, and volunteered her time and energy with the Carlyle Healthcare Center, Beckemeyer Legion Post 1227 Ladies Auxiliary, Meals on Wheels, and Beckemeyer Community Development Club (B.C.D.C.). She was a faithful parishioner of St. Anthony of Padua Catholic Church in Beckemeyer all her life, and was a beloved member of the community. Marcella married Jim Knapp on Dec. 31, 1954, at St. Anthony Catholic Church in Beckemeyer. As an incredibly inspiring and unconditionally loving mother, she birthed and raised 11 children. She is survived by nine of her children: James (Debbie) Knapp of Greenville, Sue (Steve) Weishaar of Beardstown, Beverley (Sheldon) Carter of Beckemeyer, Ron (Janel Esker) Knapp of Glen Carbon, Dodie (Jack) Rose of Las Vegas, NV, Brian (Melinda) Knapp of Breese, Pat Knapp of Beckemeyer, Kyle Knapp of Rockwell, NC, Cory (Susan) Knapp of Breese; her grandchildren: Chris Knapp of Trenton, Kristy (Jay) Wessel of Beardstown, Kelly Rae Smith of Beckemeyer, Danielle (Joe) Heffernan of Wood River, Dana Smith (fiancé Kyle Sardigal) of Collinsville, Philip Knapp of Chicago, Noah Knapp of Napa, CA, Nora Esker of Glen Carbon, Lindsey Knapp of Beckemeyer, Joshua Knapp of St Louis, MO, Joe Knapp (friend Jamie Whitaker) of Carlyle, Lily Horstmeyer of Trenton, Lucia, Naomi, Xavier, and Elijah Knapp of Breese; her great-grandchildren: Karly & Katelyn Wessel of Beardstown, Payton Plummer of Collinsville, Isabelle Gilomen of Shattuc, Camryn and Kylah Belcher of Beckemeyer; and her brother, Benedict (Henrietta) Koch of Germantown. Marcella is preceded in death by her husband, Jim; her sons, Kenny and Kevin Knapp; her grandsons, Adam and Oliver Knapp; her brothers, Bill, Joseph, Charles, Anthony, Bernie, and Alvin Koch; and her sisters, Elizabeth Jewell, Dorothy Wrassman, Cornelia Sorrell, Beatrice Walls, and Veronica Sullins. A Funeral Mass of Christian Burial will be held at 10:00 AM on Monday, July 24, 2017 at St. Anthony Catholic Church in Beckemeyer with Fr. Chuck Tuttle and Fr. James Deiters officiating. Interment will follow at St. Anthony Cemetery. Visitation will be held from 2 until 6:00 PM on Sunday, July 23, 2017 at Nordike Funeral Home in Carlyle and again on Monday from 9 until 10:00 AM at St. Anthony Catholic Church. Memorials will be accepted at the funeral home, and can be made out to B.C.D.C. for their ‘Plant A Memory’ fund or to St. Anthony Catholic Church for a new roof.

The spirit of Marcella Agnes Knapp left her earthly body at 80 years old, on July 19, 2017, in St. Louis, Missouri. She was born October 20, 1936, as the youngest of 13 children to Joseph and Elizabeth (Aarns) Koch, Marcella was a lifelong resident... View Obituary & Service Information

The family of Marcella A. Knapp created this Life Tributes page to make it easy to share your memories.

The spirit of Marcella Agnes Knapp left her earthly body at 80...

Send flowers to the Knapp family.