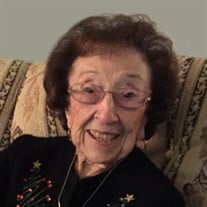 Marcella L. Ibsen, 101, formerly of New Baden, IL, died Wednesday, September 6, 2017 at Amber-Glen Assisted Living Center in Champaign, IL. She was born April 16, 1916 in New Baden, IL, the daughter of Edward F. and Emma D., nee Singler, Baehr, Sr. She married John H. “Jack” Ibsen January 19, 1946 in Chicago, IL and he preceded her in death on May 16, 2004. Marcella is survived by her daughter, Pam (Jerry) Bedford of Champaign, IL; niece and nephews, Alvis “Pepso” (Margie) Mattern of Mascoutah, Keith (Sharon) Mattern of Belleville, and Kay (Larry) Keilbach of Highland; and she is also survived by special friends, the Graf and Sagle Families all of Chicago. In addition to her parents and husband she was preceded in death by a sister, Virginia Mattern; a brother, Edward Baehr, Jr; a brother-in-law, Alvis Mattern; and her father-in-law and mother-in-law, Charles and Mary Ellen Ibsen. Mrs. Ibsen was a manager for Skokie Valley Ice Cream Shop, cashier and assistant bookkeeper for Franklin-Weber-Pontiac in Chicago, and a dental x-ray technician for Minamax Dental X-ray in Chicago. During WWII she made bandages and knit mufflers for the Red Cross to give to servicemen. She was a member of Zion United Church of Christ in New Baden, the American Legion Auxiliary Post 321 in New Baden, the New Baden Senior Citizens and Singers & Swingers, a brownie and girl scout leader in Chicago, a kindergarten Sunday school teacher for the North Shore Baptist Church in Chicago for 17 years, and a member of the National Congress of Parents & Teachers in Chicago. She had many friends and she was loved by all who knew her. Funeral Services will be held at 11 a.m. Tuesday, September 12, 2017 at Nordike Funeral Home in New Baden with Rev. Jan Dashner officiating. Burial will follow at Greenmount Cemetery in New Baden. Friends may call Tuesday, September 12, 2017 from 9:30 a.m. until time of service at Nordike Funeral Home in New Baden. Memorials may be made to the American Lung Association, Zion United Church of Christ, or to the charity of the donor’s choice and will be received at the funeral home.

The family of Marcella L. Ibsen created this Life Tributes page to make it easy to share your memories.

Send flowers to the Ibsen family.