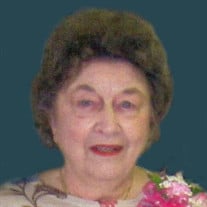 Lucille E. “Sis” Bann, nee Bailey, 91, of New Baden, IL, born February 2, 1926 in DuQuoin, IL, died Monday, July 31, 2017 at her home in New Baden, IL surrounded by her family. Sis was raised in a small suburb of DuQuoin called Sunfield. The main street was named Bailey Lane, as most of her family settled there. Sis moved to New Baden, IL her junior year of high school and graduated from New Baden High School. Sis went to work for civil service at Scott Air Force Base, IL, and also worked for her uncle in New Baden, Dr. E.C. Asbury. Sis married Ralph C. Bann on April 29, 1947 and had three children. For many years, Sis and Ralph owned and operated a popular ice cream and hamburger stand in New Baden called “Bann’s Frosty Whip”. Sis was very active in her community and with the New Baden Methodist Church. She was strong, nurturing, generous, and family and friends were very important to her. She was affectionately known as “Mee Maw” to her grandchildren and great-grandchildren. Mee Maw was the heart of our family. She is much loved and will be greatly missed. “Love knows not its own depth until the hour of separation.” K. Gibran Lucille was preceded in death by her parents, Leslie E. Bailey and Lillian B., nee Asbury, Bailey; husband, Ralph C. Bann; son, Richard L. Bann; brothers, Ernst C. Bailey and Dale A. Bailey; father-in-law and mother-in-law, James W. Bann, Sr. and Dolores A., nee Kassebaum, Bann; brothers-in-law, James W. “Bill” Bann, Jr., Paul F. Bann, Gerald Chapple, and Robert Bann; and sisters-in-law, Donna Bann, Ruth Ellen Bann, Virla Lee Bann, Gloria Hebenstreit, Betty Bann, Marilyn Sachs, Susanne Chapple, and Mildred Bann. “To live in the hearts of those left behind is not to die.” Surviving are her son, Dale C. Bann of Phoenix, AZ; a daughter, Sandra E. Seipp of New Baden, IL; grandchildren, Casey Douglass of O’Fallon, IL, and Shea C. Seipp of New Baden, IL; great-grandchildren, Madalyn A. Douglass and Luke E. Douglass of O’Fallon, IL; brothers-in-law, Carl Bann of New Baden, IL, James (Geri) Bann of Earlville, IL; sisters-in-law, Edna Bailey of DuQuoin, IL, and Elizabeth “Betty” Bailey of Mulberry, FL; and numerous nieces and nephews. Special thanks to HSHS for the care & comfort given to Lucille and her family. Memorial Services will be held at 10 a.m. Thursday, August 3, 2017 at Nordike Funeral Home in New Baden with Dr. David Estep officiating. Friends may call Thursday, August 3, 2017 from 8 a.m. until time of services at Nordike Funeral Home in New Baden. Memorials may be made to the New Baden 1st United Methodist Church and will be received at the funeral home. Condolences may be sent to the family at nordikefuneralhome.com “Our family chain is broken, and nothing seems the same; but as God calls us one by one, the chain will link again.”

The family of Lucille E. "Sis" Bann created this Life Tributes page to make it easy to share your memories.

Send flowers to the Bann family.