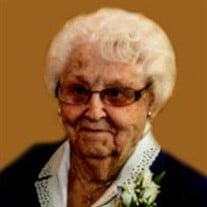 Loretta Zurliene, nee Hilmes, 90, of New Baden, died Monday, December 5, 2016 at her home. She was born September 30, 1926, the daughter of Bernard and Catherine, nee Luebke, Hilmes, Jr. She married Lawrence Zurliene on May 26, 1948 and he preceded... View Obituary & Service Information

The family of Loretta Zurliene created this Life Tributes page to make it easy to share your memories.

Send flowers to the Zurliene family.