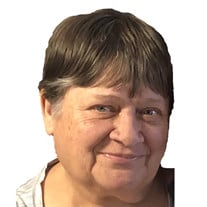 Linda Netemeyer, 66, of Albers, died Monday, October 26, 2020 at her home. She was born August 2, 1954 in Highland, the daughter of Andrew “Red” and Florence, nee Spihlman, Drees. She married Marvin Netemeyer July 20, 1989 in Carlyle and he preceded her in death on September 21, 2004. Linda is survived by her mother, Florence Drees; her children, Mike (Mindy Reyes) Strubhart of Litchfield, Wanda (Andy Rushing) Strubhart and Steve Strubhart all of Albers; her step-children, Ron (Donna) Netemeyer of Georgia, Jim Netemeyer of Washington, Bryan (Sharon) Netemeyer of Albers, Debbie (Stan) Becker of Bartelso, and Kim Netemeyer of North Carolina; eight grandchildren; two great-grandchildren; 12 step-grandchildren; 15 step-great-grandchildren; one step-great-great-grandchild; her siblings; Mike (Marilyn) Drees, Karen (John) Nieman, Pat (Ed) Nieman, Jerry (Susie) Drees, Bob (Inez) Drees, Dan (Ok Kyu) Drees, Jane Heil, and Donna (Jim) Markus; and a brother-in-law, Paul Baumgartner. In addition to her father and husband she was preceded in death by a sister, Mary Jo Baumgartner; a nephew, Jason Neiman; and three brothers-in-law, Mike Heil, Gerald Netemeyer, and John “Jack” Netemeyer. Linda was a member of St. Bernard Parish in Albers, The Albers American Legion Post 1026 Auxiliary, and the Trenton VFW Auxiliary. She loved sewing, playing bingo, traveling with her brothers and sisters, and most of all she loved spending time with all her grandbabies. Funeral Mass of Christian Burial will be held at 10 a.m. on Thursday, October 29, 2020 at St. Bernard Catholic Church in Albers. Burial will follow at St. Bernard Cemetery in Albers. Mass will be limited to 100 people and all in attendance will be required to wear a face mask. Visitation will be held from 5 p.m. until 8 p.m. on Wednesday, October 28, 2020 and again on Thursday, October 29, 2020 from 8 a.m. until 9:30 a.m. at Nordike Funeral Home in Aviston. Memorials may be made to Hospice of Southern Illinois, Albers American Legion Post 1026 Auxiliary, or to the charity of the donor’s choice and will be received at the funeral home.

The family of Linda D. Netemeyer created this Life Tributes page to make it easy to share your memories.