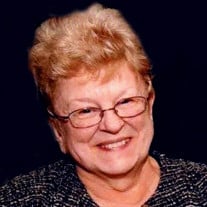 Linda A. McDonald, 74, of New Baden, died Friday, August 4, 2017 at Clinton Manor Living Center in New Baden. She was born April 23, 1943 in Fort Covington, NY, the daughter of Walter and Edna, nee Veivia, LaPage. She married Charles V. McDonald on June 6, 1964 in Syracuse, NY and he survives in New Baden. In addition to her husband she is survived by her children, Scott (Sherry) McDonald of Albers, and Kelly (Rob) Ferri of New Baden; four grandchildren, Camren & Jace Ferri of New Baden, and Justin & Austin McDonald of Albers; a brother, John (Sharon) LaPage of Syracuse, NY; a sister, Robbin (Bob) Roser of Malone, NY; and many nieces and nephews. In addition to her parents she was preceded in death by her father-in-law and mother-in-law, Frank & Mary, nee Murphy, McDonald; and a nephew in infancy, Robert John Roser, II. Linda was a 1961 graduate of Salmon River High School; from there she attended Business School and was employed at Prudential Insurance in Syracuse, NY for 6 years. Shortly after marrying her husband, the military relocated them to Scott Air Force Base in 1972, and they settled in New Baden. In addition to being a homemaker, Linda served as Librarian at the New Baden Library and also worked many years for Hallmark. She spent her spare time scrapbooking, crocheting, and doing needlepoint. She loved going to yard sales with her friends; and her biggest passion and devotion were her grandkids. She spent many days and nights helping family when needed; she was a big influence to many of her children’s friends and never met a stranger. Linda will be missed by all who knew her and will always hold a special place in all our hearts. A Funeral Mass of Christian Burial will be held at 10 a.m. Friday, August 11, 2017 at St. George Catholic Church in New Baden with Rev. Gene Neff officiating. Burial will follow at Resurrection Cemetery in New Baden. Friends may call Thursday, August 10, 2017 from 4 p.m. until 8 p.m. and again on Friday, August 11, 2017 from 8 a.m. until 9 a.m. at Nordike Funeral Home in New Baden. Memorials may be made to the wishes of the family and will be received at the funeral home.

The family of Linda A. McDonald created this Life Tributes page to make it easy to share your memories.

Send flowers to the McDonald family.