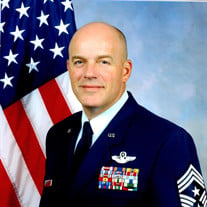 Leslie E. McPeak Jr., age 65, of New Baden passed away on Wednesday, March 2, 2022, at St. Elizabeth Hospital in O’Fallon. He was born in Pittsburgh, Pennsylvania on October 10, 1956, the son of Leslie E. and Emma Jean (Brooks) McPeak Sr. He married Lorrine Painter in Mountain Home, Idaho on August 14, 1979, and she survives in New Baden. In addition to his wife of 42 years, he is survived by his children: Leslie E. McPeak III, Laurel Arnold, Lance McPeak, Lane McPeak, and Leah McPeak; grandchildren: Amelia, Lincoln, Eli, Evan, and Ethan; his mother, Emma Jean McPeak; and siblings: Peggy Lou Slivka, Timmy McPeak, Danny McPeak, David McPeak, and Patricia Shoup. He was preceded in death by his father and brother, Bobby McPeak. Les retired from the United States Air Force after 30 years of service with the rank of Command Chief Master Sergeant. During his time in the Air Force, he served on many deployments as a Boom Operator, conducting mid-air refueling. He served in Operation Desert Storm and earned the Bronze Star for his service in Afghanistan. Les was the Command Chief for all enlisted forces at the 455th Air Expeditionary Wing, Bagram Air Base, Afghanistan, and for the 97th Air Mobility Wing at Altus AFB, OK. He was very patriotic and supportive of the troops, often time wishing he could have served longer than his 30-year term. Throughout his life he also served in the community and his local church, coached little league teams, and organized bicycle donations. After his retirement he spent his time cycling, working on his vehicles and tending to his yard to ensure it was in perfect condition. He was always willing to help his neighbors and friends with whatever task was at hand. Les enjoyed sport shooting and was an avid hunter. He was an avid Pittsburgh Steelers fan and he cherished time with his family and his beloved dog Samson and grand dogs Klyde and Vesper. A memorial service was held at 1:00 PM on Wednesday, March 9, 2022, at Nordike Funeral Home in New Baden, IL. Visitation was held prior to the service from 12:00 until 1:00 PM. Graveside services will take place at 1:00 PM on Saturday, April 23, 2022 with full military honors, at The Homewood Cemetery, located at 1599 South Dallas Avenue, Pittsburgh, PA 15217. The graveside service is open to the public. For more information about the cemetery, please visit https://thehomewoodcemetery.com/. Memorials made in memory of Les are suggested to the charity of the donor’s choice and will be received at Nordike Funeral Home, 15 East Hanover Street, New Baden, IL 62265.

The family of Leslie E. McPeak Jr. created this Life Tributes page to make it easy to share your memories.

Send flowers to the McPeak family.