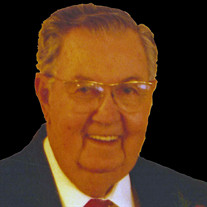 Leroy H. Wessel passed away at SSM St. Mary's Hospital in Centralia on August 4, 2016 at the age of 94. He was born on November 10, 1921, the son of Theodore and Ida Wessel. Leroy married Gladys (nee Goesling/Wessel) in Centralia on November 7, 1959 and she preceded him in death on November 10, 2014. In addition to his wife, Leroy was preceded in death by his parents Ida (nee Grefe) and Theodore Wessel; his sisters: Hilda Armstrong, Dorothy Lyman, Ruth Hanenberger, Marcella Mensing and Amanda Monken; as well as his brothers Edwin Wessel, Alfred Wessel, Irvin Wessel, Gilbert Wessel; and his daughter-in-law: Judy Wessel Surviving are his three sons: Lowell Wessel of Carlyle, Terry Wessel and wife Rolynda of Claremore, Oklahoma, and Kevin Wessel and wife Sherry of Hoffman; ten grandchildren, ten great grandchildren, and six great – great grandchildren; three brothers: Elmer Wessel of Carlyle, Theodore Wessel II and wife Rosalie of Florida and Wayne Wessel and wife Lola of Carlyle. Leroy was a member of the Hoffman and Carlyle community most of his life. In January 1942 after the bombing of Pearl Harbor Leroy enlisted in the United States Navy and spent the next 4 years aboard the Aircraft Carrier U.S.S. Ticonderoga. Leroy was witness to a number of battles in the South Pacific while aboard the Ticonderoga, one which killed his Captain of the ship. Leroy was honorably discharged from the Navy in August of 1946 at which time he returned home to the Carlyle area. In 1949 Leroy went to work for the Natural Gas and Pipeline Company in Hoffman. In the summer of 1959 Leroy met Gladys at a picnic and by November they were united in marriage. Gladys and Leroy enjoyed 55 years of marriage while raising 3 boys and enjoying life. In September of 1982 after 33 years of work Leroy finally retired at the age of 63 and decided to enjoy his life at home with Gladys. Leroy enjoyed going to Church and singing, he also really enjoyed gardening, especially growing tomatoes and yard work. He was a lifetime member of Carlyle VFW Post 3523 and was an avid Cubs fan. Visitation for Leroy and his family will be Tuesday, August 9, 2016 from 9:00 until 11:00 at Trinity Lutheran Church in Hoffman. The funeral service will begin at 11:00 AM on Tuesday, August 9, 2016 at Trinity Lutheran Church in Hoffman with Pastor Stephen Krenz officiating. Internment will follow at Carlyle Township Cemetery. Memorials can be made in memory of Leroy to Hoffman Trinity Lutheran Church and School Endowment Fund, Christ Our Rock Lutheran High School or to the charity of donor’s choice and will be received at church or Nordike Funeral Home, 740 Fairfax Street in Carlyle.

Leroy H. Wessel passed away at SSM St. Mary's Hospital in Centralia on August 4, 2016 at the age of 94. He was born on November 10, 1921, the son of Theodore and Ida Wessel. Leroy married Gladys (nee Goesling/Wessel) in Centralia on November... View Obituary & Service Information

The family of Leroy H. Wessel created this Life Tributes page to make it easy to share your memories.

Send flowers to the Wessel family.