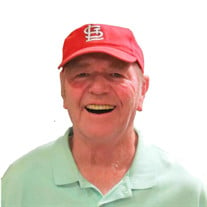 Leroy William “Salt” Merscher, age 79, of Bartelso passed away on October 29, 2020 in Litchfield, Illinois. He was born on April 22, 1941 in Bartelso, the son of Henry and Irene (Loepker) Merscher. He is survived by two sisters: Marjorie Wallace and Virginia Wey both of Litchfield, IL; twelve nieces and six nephews; twenty-eight great nieces and nephews; and lifelong friends, the Winkeler family. Mr. Merscher was preceded in death by his parents; four brothers: Harry, Clarence, Ralph, and Edward Merscher; three sisters: Cyrilla Schlautmann, Irene Warnecke, and Mary Dolores Merscher. He was member of St. Cecilia Catholic Church, Bartelso Knights of Columbus, and the 109 Sportsman Club. Leroy retired from Arrow Group Industries in Breese after 36 years of employment. Prior to that he worked at Mid Central Elevator in Germantown and as a part time bartender at West End Tavern in Bartelso. Salt was an avid baseball and softball fan, he played on the Clinton County Baseball League, the Bigfoot Softball League, and Larry’s Softball League. After his playing days, he enjoyed traveling all over the county watching softball and baseball games. Leroy was also a lifelong St. Louis Cardinals and St. Louis Blues fan. Mass of Christian Burial will be held at 12:00 PM on Saturday, November 7, 2020 at St. Cecilia Catholic Church in Bartelso with Fr. James Buerster officiating. Attendance at church will be limited to 100 people. Interment will follow at St. Cecilia Catholic Cemetery in Bartelso. Visitation will be held from 9:00 until 11:30 AM on Saturday, November 7, 2020 at Nordike Funeral Home in Carlyle. All in attendance for both the Mass and visitation will be required to wear a face mask. Memorials made in memory of Leroy are suggested to St. Cecilia Catholic Church, HSHS Hospice of Central Illinois, or masses and will be received at Nordike Funeral Home, 740 Fairfax Street, Carlyle, IL 62231.

The family of Leroy "Salt" Merscher created this Life Tributes page to make it easy to share your memories.

Send flowers to the Merscher family.