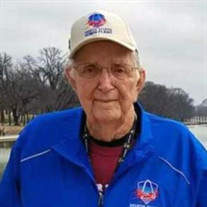 Leroy B. Mensing, age 91, of Hoffman passed away on Friday, February 11, 2022 at Aviston Countryside Manor. He was born on July 30, 1930 in the son of George and Rose (Huelsmann) Mensing. He married Marcella “Sally” Wessel on September 18, 1954 and she preceded him in death on November 5, 2005. He is survived by his children: Kathy (Rick) Zumwalt of Carlyle, Ramona Brown of O’Fallon, James Mensing and significant other Sarah Hester of Hoffman; grandchildren: Joseph (Amanda) Gonzalez, Melissa Gonzalez, Jeremy (Tiffany) Zumwalt, Amanda Zumwalt, Shannon (Rebecca) Zumwalt, Chad (Emily) Zumwalt and Cassie (Dan) Watson; great grandchildren: Riley Gonzalez, Emily Zumwalt, and Everett Zumwalt; a sister-in-Law, Marie Mensing. In addition to his mother, father, and wife he was preceded in death by two brothers: Alfred (Evelyn) Mensing and Dennis Mensing; two sisters: Florence (Ray) Beckmann and Johanna (Leon) Beckmann. Leroy was a veteran of the United States Army and served in Germany during the Korean Conflict. He was a life member of the VFW Post 3523 in Carlyle. He worked most of his life for Lake Township where he held many jobs such as commissioner, laborer, and operator. Leroy enjoyed fishing, camping, playing music, a good game of horseshoes as well as watching wrestling and picking pecans. He loved spending time with his family. Funeral services will be held at 11:00 am on Wednesday, February 16, 2022 at Nordike Funeral Home in Carlyle. Burial will follow at Trinity Lutheran Cemetery in Hoffman with full military honors accorded. Visitation will be held from 4:00 until 8:00 pm on Tuesday, February 15, 2022 and on Wednesday from 9:00 until the time of services at Nordike Funeral Home in Carlyle. Memorials made in memory of Leroy are suggested to the Honor Flight of Greater St. Louis and will be received at Nordike Funeral Home, 740 Fairfax Street, Carlyle, IL 62231.

The family of Leroy B. Mensing created this Life Tributes page to make it easy to share your memories.

Leroy B. Mensing, age 91, of Hoffman passed away on Friday, February...

Send flowers to the Mensing family.