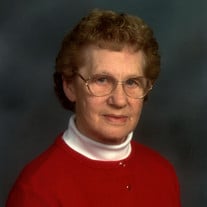 Leona M. Beckmann, age 84, of Carlyle passed away on Saturday, July 28, 2018 at the Carlyle Healthcare Center. She was born in Bartelso, Illinois on July 22, 1934 the daughter of Joseph and Mary (Jansen) Mueller. She married Leo Beckmann at... View Obituary & Service Information

The family of Leona M. Beckmann created this Life Tributes page to make it easy to share your memories.

Leona M. Beckmann, age 84, of Carlyle passed away on Saturday,...

Send flowers to the Beckmann family.