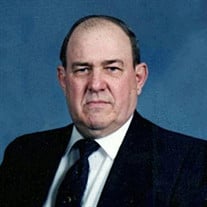 Laverne H. Lowe, 80, of Carlyle, passed away Friday, March 17, 2017, at the Carlyle Healthcare Center. He was born March 29, 1936, in Breese, the son of Henry and Amelia (Lee) Lowe. He married Edna Jansen on June 11, 1955 in Aviston and she survives in Carlyle. In addition to his wife, Laverne is survived by his son, Brian (Connie) Lowe; his daughter, Diane (Leo) LaRose both of Carlyle; two brothers: Gary (Bernie) Lowe of Carlyle, and Bernard Lowe of Carlyle; a sister: Ruth Ann Hopper of Keyesport; four grandchildren: Melissa Mosley, Jason Lowe, Nick Mosley, and Michelle Topps; five great-grandchildren: Matthew, Ashley, Amelia, Jamar, and Jerryn; and his sister-in-law, Nancy Lowe of Carlyle. He was preceded in death by his parents and his son, Mark Edward Lowe; a brother, Gene Lowe, and brother-in-law, Gerald “Jerry” Hopper. Laverne worked at Moran Shoe Company in Carlyle before starting his career at General Motors. While at GM his main job was an air tool repairman, but was certified as a pipefitter and welder. Mr. Lowe retired after 30 years at GM and moved on to his many hobbies. Some of which included woodworking, hunting and fishing, tractor shows, and Harley motorcycles. In his younger years Laverne raced stock-cars. He was the owner of a Ford Model A that he restored, as another of his hobbies was restoring old cars. Funeral Mass of Christian Burial will be held at 11 a.m. on Tuesday, March 21, 2017, at St. Mary Catholic Church in Carlyle with Fr. George Mauck officiating. Interment will follow at St. Mary’s Cemetery in Carlyle. Friends and relatives may call from 4:00 p.m. until 8:00 p.m. on Monday, March 20, 2017 at Nordike Funeral Home in Carlyle. And on Tuesday from 8 a.m. until 10:30 a.m. also at Nordike Funeral Home in Carlyle. The Knights of Columbus Carlyle Council 1382 will conduct a rosary service at 7:00 p.m. on Monday at St. Mary Church in Carlyle. Memorials may be made to the Memorials may be made to the Multiple Sclerosis Society, or the charity of the donor’s choice and will be received at the funeral home.

The family of Laverne Henry Lowe created this Life Tributes page to make it easy to share your memories.

Send flowers to the Lowe family.