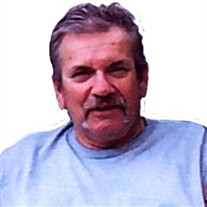 Larry D. Towell, 66, of Carlyle passed away on Sunday, July 1, 2018 at St. Elizabeth Hospital in O’Fallon, Illinois. He was born in Hillsboro, Illinois on December 4, 1951 the son of Thomas and Avis (Coleman) Towell. He married Marie Carriker in Litchfield, Illinois on May 1, 1970 and she survives in Carlyle. In addition to his wife, Larry is survived by two sons: Gary (Jennifer) Towell and Eric (Samantha) Towell all of Carlyle; four grandchildren: Lily and Calab Towell, Tyler Flood and Chrissy McCardy; two great grandchildren, Mason and Asher; his niece, Vicky Westbrook; nephew, Kevin Landers; brother-in-law, Keith Landers of Coffeen; sisters-in-law: Evelyn (Ivan) Blankenship of Litchfield, Donna (Randy) Hayes of Polo, IL, and Nona (Steve) Tosetti of Nokomis; his mother-in-law, Esther Carriker; as well as numerous great nieces, nephews and friends. He was preceded in death by his mother and father; a sister, Carol Landers and his father-in-law, Philip Carriker. Larry was a veteran of the Illinois National Guard. He worked at Consolidated Coal and later at Monterey Coal Mine Number 2 in Hillsboro. He retired from the City of Carlyle Street and Alley Department in 2015. He liked spending his time deer hunting and watching wrestling. In his early years he enjoyed drag racing and tractor pulls. Larry adored his wife, children and grandchildren. Funeral services will be held at 11:00 AM on Friday, July 6, 2018 at Nordike Funeral Home in Carlyle. Interment will follow at Carlyle Township Cemetery. Visitation will be held from 4:00 until 8:00 PM on Thursday, July 5, 2018 and on Friday from 8:00 AM until the time of services at Nordike Funeral Home in Carlyle. Memorials made in memory of Larry are suggested to the charity of donor’s choice and will be received at the funeral home.

Larry D. Towell, 66, of Carlyle passed away on Sunday, July 1, 2018 at St. Elizabeth Hospital in O&#8217;Fallon, Illinois. He was born in Hillsboro, Illinois on December 4, 1951 the son of Thomas and Avis (Coleman) Towell. He married Marie Carriker... View Obituary & Service Information

The family of Larry D. Towell created this Life Tributes page to make it easy to share your memories.

Send flowers to the Towell family.