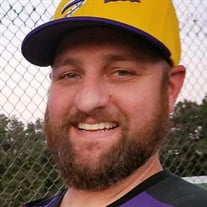 Kristopher J. Kauling of Hoffman passed away on Sunday, October 4, 2020 at the age of 40 years. He was born in Breese, Illinois on September 17, 1980 the son of Kenneth and Bonnie (Perez) Kauling. He married Tasha Ainslie in Beckemeyer on September 15, 2012 and she survives in Hoffman. In addition to his wife, he is survived by three children: Keaton, Kyler and Ainslie Kauling all of Hoffman; his mother and father, Bonnie and Ken Kauling of Beckemeyer; his brother, Todd Peppenhorst and fiancee Lauri Brueggemann and his nephew Jaron Seiffert and friend Kaitlyn Albers of Carlyle; mother-in-law and father-in-law Melodie and Ray Ainslie of Hoffman; brother-in-law Andy Ainslie and wife Katie and his niece Ellisyn Ainslie of Clarksville, TN; his grandmother Irma Perez of Beckemeyer; as well as many aunts, uncles, cousins and friends. He was preceded in death by his grandfather Manual Perez. Kris managed Gateway FS Inc in Ferrin, he enjoyed his work and was able to talk endlessly about his favorite subject of crops. He was a passionate fan of the Chicago Blackhawks and Cubs and Tennesee Titans. He enjoyed anything outdoors, especially hunting, fishing, and playing softball. His best trait was his gift of gab, he could talk to anyone, anywhere, about anything. Above all else, Kris loved his children, Keaton, Kyler, and Ainslie. His favorite activity was watching them play sports and coaching when he could. His children were his world. He will be dearly missed by his family and friends. Funeral services will be held at 10:00 AM on Saturday, October 10, 2020 at Trinity Lutheran Church in Hoffman with Pastor Mark Hofferber officiating. Interment will follow at Trinity Lutheran Cemetery in Hoffman. Visitation will be held from 4:00 until 8:00 on Friday, October 9, 2020 at Nordike Funeral Home in Carlyle and on Saturday from 9:00 until 10:00 AM at Trinity Lutheran Church. Memorials made in memory of Kris are suggested to his children’s education fund, please make checks payable to Tasha Kauling. Memorials will be received at Nordike Funeral Home, 740 Fairfax Street, Carlyle, IL 62231.

Kristopher J. Kauling of Hoffman passed away on Sunday, October 4, 2020 at the age of 40 years. He was born in Breese, Illinois on September 17, 1980 the son of Kenneth and Bonnie (Perez) Kauling. He married Tasha Ainslie in Beckemeyer on September... View Obituary & Service Information

The family of Kristopher J. Kauling created this Life Tributes page to make it easy to share your memories.

Kristopher J. Kauling of Hoffman passed away on Sunday, October...

Send flowers to the Kauling family.