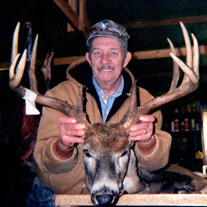 Keith Haar, 83, of New Baden, died Friday, October 22, 2021 at his home. He was born September 9, 1938 in New Baden, the son of John and Gertrude, nee Henke, Haar. He married Linda Staffey February 14, 1998 in New Baden and she survives in New Baden. In addition to his wife he is survived by his daughters, Brenda (Keith) Winter, Beverly (John) Shipkowski, and Bridget (Richard) Wilson; step-children, Debbie (Andy) Talmadge, Michelle (Scott) Jackson, Cathy Harrawood, Bob (Gretchen) Harrawood, and Gary Harrawood; and grandchildren, great-grandchildren, nieces, and nephews. In addition to his parents he was preceded in death by his siblings, John Haar, Lucille Klingman, Mildred Deutschmann, James Haar, Catherine Macke, Agnes Macke, and Mary Ann Ford; and his sisters-in-law and brothers-in-law, Florence Haar, Clarence Deutschmann, Laverne Klingman, Rita Haar, Herman Macke, Henry Macke, and Ed Ford. Mr. Haar was a machine operator for Pet Dairy in O’Fallon and a veteran of the United States Army. He was a member of St. Peter Lutheran Church in New Memphis. Keith was an avid hunter and fisherman and played pool for many years at Ford Brothers Tavern. A Celebration of Life will be held at the American Legion Post 321 in New Baden starting at 3 p.m. on Saturday, October 30, 2021. Memorials may be made to the charity of the donor’s choice and will be received at the American Legion or Nordike Funeral Home, 15 E. Hanover St., New Baden, IL 62265 who is serving the family.

The family of Keith Haar created this Life Tributes page to make it easy to share your memories.

Send flowers to the Haar family.