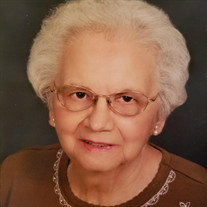 Junilla E. “Nellie” Wieter, 93, of Breese, died Friday, February 21, 2020 at Caring First Nursing Home in Breese. She was born February 16, 1927 in Beckemeyer, the daughter of Charles and Callie (Groeber) Nowacki. On June 15, 1949, she married Norbert Wieter, at St. Anthony’s Church in Beckemeyer. Nellie graduated from St. Mary’s High School, Carlyle, in 1945 as its valedictorian. She then worked for the Moran Shoe Company in Carlyle and the smelter in Beckemeyer. From 1952 to 1966 she worked for the City of Breese as Assistant City Clerk and again in 1973. She also worked for the Farm Bureau during tax season doing taxes for farmers and then later volunteered, doing taxes for seniors. Nellie was a member and past president of St. Dominic’s Altar Sodality; member and past president of Breese American Legion Auxiliary Timmermann-Benhoff Unit 252 and a Charter Member and past president of St. Joseph’s Hospital Auxiliary, all in Breese. She enjoyed reading, quilting, crocheting, and spending time with her family and friends. She was one of the original “Hardee’s girls,” meeting friends every Wednesday morning at Hardees after Mass for over 25 years. She is survived by two daughters, Mary (Jim) Burns of Breese, and Nancy (Bob) Grogan of St. Louis; two grandchildren, Kevin (Julie) Grogan of St. Louis and Mark (Ashley) Grogan of Kansas City; two step-grandchildren, Jessica Longshaw and Jim (Kristie) Burns, both of Breese. She was great-grandma to Ryan Grogan, Cameron Grogan and Grace Grogan; she was also step-great-grandma (aka Memaw) to Alex Huelsmann, Brayden Huelsmann, Grant Huelsmann, Liv Longshaw, Emma Burns, Addie Burns and Owen Burns. She is also survived by a sister-in-law, Rose Marie Nowacki of Murphysboro. She was preceded in death by her parents, her husband, on October 3, 2008; her father-in-law and mother-in-law, Harry and Laura Wieter; brothers and sisters-in-law, Carl and Alma Nowacki, Ray Nowacki, and Gilbert and Chris Nowacki. Funeral Mass of Christian Burial will be held at 10 a.m. Saturday, February 29, 2020 at St. Dominic Catholic Church in Breese with Rev. Patrick Peter and Deacon Linus Klostermann officiating. Burial will follow at St. Dominic/St. Augustine Cemetery in Breese. Visitation will be held Friday, February 28, 2020 from 4 p.m. until 8 p.m. and again on Saturday, February 29, 2020 from 8:30 a.m. until 9:30 a.m. at Nordike Funeral Home in Breese. Memorials may be made to St. Dominic Catholic Church, Mater Dei Catholic High School or St. Joseph’s Hospital Auxiliary “Lights for Scholarship.”

The family of Junilla E. "Nellie" Wieter created this Life Tributes page to make it easy to share your memories.

Send flowers to the Wieter family.